In his 24-year-long career, Sachin Tendulkar has played with array of Tamil Nadu cricketers.

In a 24-year-long cricketing career at the highest level, Sachin Tendulkar has played with an assortment of cricketers from Tamil Nadu. Starting with Krishnamachari Srikkanth, the list includes the likes of WV Raman, Robin Singh, Hemang Badani, Lakshmipathy Balaji, Dinesh Karthik, Ravichandran Ashwin, Murali Vijay and Abhinav Mukund. He must have found deciphering Tamil difficult in his early days, but it all actually helped him bat better at least once.

Rajdeep Sardesai had launched his book Democracy XI on Monday. Other than Sardesai and Tendulkar, the book launch was attended by the likes of Sunil Gavaskar and Harsha Bhogle. It was here that Tendulkar narrated an incident that took place in a domestic match between Tamil Nadu and Mumbai.

Tendulkar was on strike. The bowlers had managed to get some reverse-swing with the new ball. Tendulkar decided to stand two feet outside the crease to counter the swing.

You think someone can baffle @sachin_rt on the ground by speaking in Tamil ? GOD no way. Thanks for sharing this Paaji. pic.twitter.com/wyQYIRLNFi

But a language barrier was hardly sufficient to outfox Sachin. As he recollected: Badani failed to understand that I had spent around good 15 years with the Indian team with guys from Chennai in the dressing-room. I understand [Tamil] little bit [sic]. So [according to] munnadi and pinnadi (forward and backward) I would constantly be altering my stance because I could follow what Hemang was telling the bowler and do exactly the opposite. So sometimes it works to your advantage.

Even Badani could not control his laughter and took to Twitter on Tendulkar’s response of the incident. 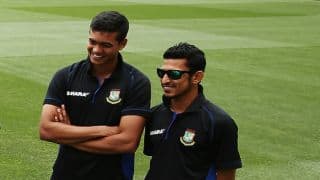