Whatever may be the reason numerological, astrological or personal jersey numbers play an important role in a sportsman s identity.

The jersey numbers are an integral part of any sportsperson s life. Sachin Tendulkar is still remembered for his number 10. MS Dhoni s jersey no. 7, which is his birth date, has become his identity. The numbers of Yuvraj Singh (12) and Harbhajan Singh (3) too are after their birth dates. Budding cricketer Sarfaraz Khan has an interesting story behind his jersey number, as he wears 97 ( Nau saat in Hindi), which resembles his father Naushad s name. In other sports too the players have been known by their jersey numbers. One of world s best footballers Cristiano Ronaldo is even called as CR7 by his fans after his number.

In a nutshell, whatever may be the reason numerological, astrological or personal numbers play an important role in a sportsman s identity. There is a story behind every player s number and Team India s star opener in limited-overs matches Rohit Sharma is no different. The Mr. Talent of Indian cricket, Rohit wears jersey number 45 in international cricket. The number was apparently suggested to him by an astrologer, who felt it will be lucky for Rohit. However, the stylish batsman did not want to wear a single digit number, and this is when his mother came to his rescue. But in the ongoing fourth match of the series against New Zealand at Ranchi, he wore a jersey with number 9 on it and hid the name. No idea why he did so but he may have done that to bring some fortune to his batting as he has not been able to score big in the ongoing series.

Coming back to his original jersey number 45, yes, it was Rohit s mother who helped him select his jersey number. She picked the number 45 for him when he was playing for India in Under-19 World Cup 2006. There was no jersey number at that time and before the semi-final, the players were asked to pick a number for the jersey. Rohit wished for 19 but it was not vacant. He called his mother, and she chose the number 45. This is how he got the No. 45 imprinted on his jersey. 4 and 5 add up to 9, the number recommended by the astrologer, so Rohit had no issues accepting 45 as his jersey number. Since then, to the present date, Rohit continues to play with the number 45, which firmly finds a place on the backside of his shirt in international cricket. His Twitter handle too has a place for it (@ImRO45). 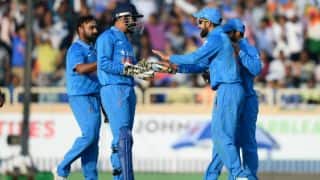