'The Wall' is no more impregnable

'The Wall' is no more impregnable

The impregnable defence that earned him the sobriquet of 'The Wall' is suddenly looking shaky in the ongoing Test series against Australia and experts are at a loss to explain just what is Rahul Dravid doing wrongly to get out bowled. 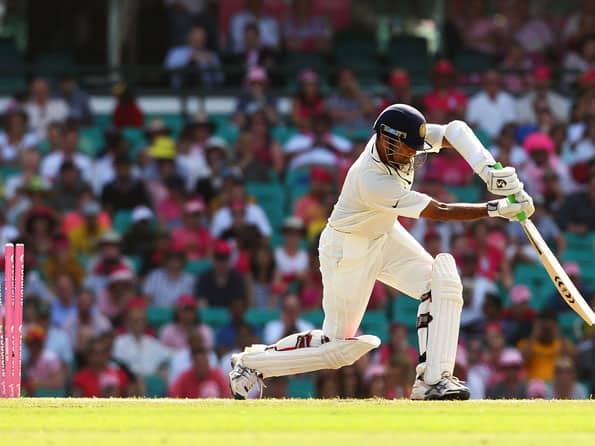 The impregnable defence that earned him the sobriquet of ‘The Wall’ is suddenly looking shaky in the ongoing Test series against Australia and experts are at a loss to explain just what is Rahul Dravid doing wrongly to get out bowled.

For 15 years and 162 Tests, Rahul Dravid has risen to be the second highest scorer in Test history on the basis of his technique. Any condition, any opponent, any quirk was never good enough to breach the defence of the admirable batsman.

Now he has been out bowled in the last six of his nine Test innings that’s discounting the no-ball bowled at MCG and a total of 13 times in the last 12 months.

Ian Chappell suggests that Dravid is too worried he hasn’t covered the out-swing of a delivery enough and hence is tending to play outside the line of a delivery.

Dravid’s two dismissals to Ben Hilfenhaus in the two Tests against Australia support this theory. On both occasions, he played outside the line of the delivery and left a gap between his bat and pad.

Hilfenhaus is usually a bowler who would only bowl outswingers. His action rarely permits an incoming delivery.

That Sydney dismissal was due to an off-cutter which Hilfenhaus managed by under-cutting the seam of the delivery.

It took Dravid completely by surprise.

Sourav Ganguly is equally bewildered and wonders if Dravid is not going forward enough and with his bat always in front of his pads, it is leaving a gap big enough for the ball to breach his defence.

A senior player of the side thinks there has always been a particular spot on which Dravid has found it difficult to go full forward throughout his career. It has led to 52 dismissals by way of bowled — second only to Allan Border’s 53 rattling of timber.

Somehow all these dismissals never registered in discerners’ mind, so elegant was his presence at the crease, the crispness of his strokes and masterly negotiation of the short stuff.

Dravid has easily spent more time at the crease than anyone in the history of the game. Even though his strike-rate was never better than 42.56, no battle for India was ever over till Dravid was at the crease.

Now Dravid looks fallible and he knows it and it explains the unusual fretting he indulged in before the second Test at SCG last week.

He asked fielding coach Trevor Penny and main coach Duncan Fletcher to have a closer look at his technique. Every throw-down negotiated was followed by a technical inter-exchange among the three.

Should Dravid open up his stance a little? is his head falling over on the off-side a little? is he playing too early at deliveries? All kind of possibilities were explored. Yet the outcome of the Sydney Test was the same.

Coach Fletcher admits “Dravid is presently a little off-form.” The batsman himself doesn’t believe so.

“I feel I have been batting well. Hopefully, in the next couple of Tests, I will be able to convert one of these starts. Sometimes you can’t read too much into things,” said Dravid.

“To be fair, there have been couple of pretty good balls.

It’s not like I have got out, you know, inner-edging. A couple of good balls, and then a couple of things I could have done differently,” he insisted.

Dravid is one of the neatest presence at the crease.

Former India captain Kapil Dev says he reminds him of batsmen of the 60s who never played with pad and nearly always used their bats.

The Test at WACA, Perth later this week would reveal if the repair in technique has been worked out and if ‘The Wall’ is impregnable as it always has been.(PTI)

Sachin Tendulkar's statue to be installed in The Bradman museum