Going through a tough phase of late, Indian cricket coach Duncan Fletcher on Wednesday said "there has been "no middle road" with his team's performances since he took over the job after the World Cup last year. 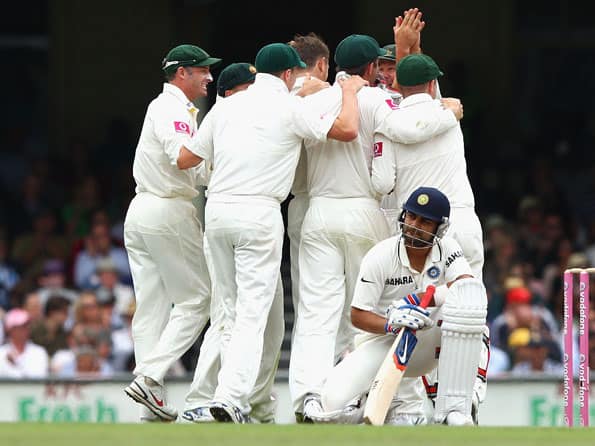 Going through a tough phase of late, Indian cricket coach Duncan Fletcher on Wednesday said “there has been “no middle road” with his team’s performances since he took over the job after the World Cup last year.

While India tasted success against the West Indies and in the one-day series against England at home, their reputation took a beating following two disastrous tours to the Old Blighty and Australia.

“Well, so far there’s been no middle road,” Fletcher said on arrival here with his players for a one-off Twenty20 match against South Africa on Friday.

“We’ve played some very good cricket (in West Indies and at home) and then we’ve gone on to what I would consider two of the toughest tours you can go on within a short period of time.

“I don’t know if any other side has done that: gone to England and Australia within four months,” Fletcher said.

India’s ODI side failed to make it to the finals of the triangular series also involving Sri Lanka during their tour of Australia.

Skipper Mahendra Singh Dhoni’s men also failed in the Asia Cup as they couldn’t reach the final of the four-nation tournament after losing to Bangladesh in the league stage.

Their Test side had a disastrous tour of Australia where they lost 0-4, just a few months after suffering a similar fate in England.

The idea of travelling to another part of the world for a one-off match ahead of the seven-week long IPL may not be the best way to go about it, but Fletcher seemed at ease.

“We have got quite a lot of young players here. We’ve been trying to develop a young one-day squad and Twenty20 squad. These blokes have played well on the subcontinent and any game they play out of it must be very good from an experience point of view,” he said.

“There are a lot of young players we are trying to groom, and hopefully it will pay dividends in the future. From our point of view there is a lot of talent around, we need to give them the exposure they require,” he added.

His South African counterpart Gary Kirsten said he was excited about the match even though it will be difficult for his boys as they would have no rest after returning from their tour of New Zealand.

“Its going to be tough but I am quite excited. We’ve got a couple of new guys to have a look at there,” he said.

“It’s difficult, it’s the end of the season and it’s a one-off game, but I think we are going to keep it pretty lighthearted, if we can stay awake.” (PTI)