There is healthy competition between English batsmen: Bell

There is healthy competition between English batsmen: Bell

England batsman Ian Bell, who struck a career-best 235 in the ongoing fourth Test against India to become the year's leading run-getter, feels there is "healthy and constructive" competition to notch up big scores in his team. 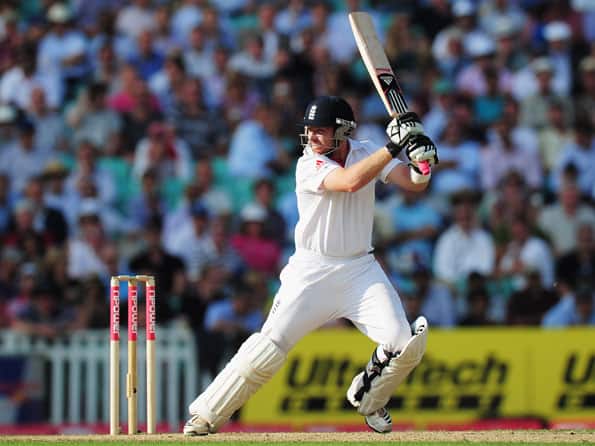 England batsman Ian Bell, who struck a career-best 235 in the ongoing fourth Test against India to become the year’s leading run-getter, feels there is “healthy and constructive” competition to notch up big scores in his team.

“There is competition among each other. If someone gets a big score, your mind tells you get a bigger one. There is some competitiveness there but it’s healthy and constructive.

We talk openly how to play bowlers, share ideas and prepare for a Test match,” stated Bell, who now has 950 runs from the year, overtaking teammate Alastair Cook’s tally of 927 runs.

England presently possesses quite a few batsmen with good number of centuries under their belt. Alastair Cook, Kevin Pietersen and Andrew Strauss all have 19 centuries each while Bell has 16, including this knock of 235 runs.

“When I started, there were batsmen with 4-5 centuries.

We all are stacking some numbers now and it’s great for English cricket,” Bell said.

Despite his career-best score at the Oval yesterday, Bell has some mixed feelings about the venue.

“It’s a funny ground. I never made big here. I had a good debut and here I resurrected my career but I have mixed feelings. I have sat in the same seat in the dressing room and it has finally paid off.”

Bell, who is standing in for an injured Jonathan Trott at the number three position, said he has some unfinished business to achieve at that particular slot.

“I have some unfinished business at three. When I was put up the order, I probably wasn’t ready. I am better now but I am realistic I would be back at number five next year.

“I fell one short (of 200) last time against South Africa; one run can make hell of a difference. But I enjoyed this, it is one of my better knocks. I am batting as good as I have ever been in my career,” he said.

Bell said if possible, England would try to enforce the follow-on on India on the fourth day.

“The way the wicket has deteriorated as much as it has, it’s quite unusual. The spin Swann was able to get was incredible. We can now enforce the follow-on. Swann can bowl at one end while the seamers could be fresh and be rotated at the other end.

“The spin he (Swann) got makes it quite exciting for the winter (when England makes a tour of the sub-continent). It tells what we can do on a spinning wicket,” he said.

Bell also praised Ishant Sharma and S Sreesanth for the attitude they have shown while bowling to England batsmen. (PTI)