The India captain believes it is important for the players to start planning for their game against Australia on Saturday.

India captain Harmanpreet Kaur is not letting her guard down even though her team has qualified for the semi-final of the ICC Women s World T20. Following India s 52-run win over Ireland on Thursday, Harmanpreet believes it is important for the players to start planning for their final Group game against Australia on Saturday, while pointing out that there still are areas that require improvement.

“I’m happy that we have qualified for the semis, but there are still a few things that we need to sit down and talk about. It s a short format,” Kaur said. “We have to be aggressive on the field, and improvements need to be made. We need to improve across the batting and bowling departments. We did not bat according to our plan today.”

After Mithali Raj s half-century guided them to 145/6, India kept Ireland to 93/8 to confirm their semi-final spot. Mithali s consecutive half-century of the tournament was vital in helping India to a decent total. However, after the opening pair of Mithali and Smriti Mandhana had laid a solid foundation for a big total, Ireland pulled things back in the death overs as they managed just 36 runs from their final five overs apart from losing four wickets as well.

As India get ready to face Australia next, Harmanpreet will be hoping to produce a repeat of her stunning assault on Australia during the semi-final of last year s World Cup. Kaur had hammered 171 off 115 deliveries with 20 boundaries and seven sixes, and having already lit the tournament with a century in the first game, the 29-year-old is expected to continue her hot streak and finish the group without a loss.

“I m looking quite confident (at the moment), but whatever has happened is history now and it s a new day, a fresh day. I’m hoping if I get a start I can continue the same momentum.” Harmanpreet said. I really enjoyed that particular day, but now it s in the past. This is a new game for us and I have to start from the very first ball.

One aspect in particular that Australia would be worried of is Kaur s knack of hitting long sixes. New Zealand witnessed first-hand what Kaur s power-hitting is capable of when the India captain tonked seven boundaries and eight sixes.

“After my training I like to hit long shots. It always gives me confidence when I get my first few boundaries, you feel like you can clear it after that. I like to hit big shots and my game is hard hitting,” she said.

Harmanpreet credits her stint with Sydney Thunder in the Women s Big Bash League, and feels they can go one up on their semi-final finish last year this time around. “I always enjoy when I play for the Thunder, “she said. “Last year we did really well and made the semis and hopefully this year we win. The WBBL has a really good standard, all the teams are very good you never get a team where you can go and get easy runs.

“When you play with overseas players in these places you get a lot of confidence from them, you re always learning something new and coming out of your comfort zone. When we (travel) as a team out of the country as it s a different thing to playing alone with other overseas players. You learn a lot of things… and it s really helped me.” 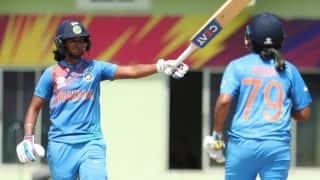