Australia were struggling to finish off the Sri Lankan resistance and push on for victory on the final day of the first Test in Hobart. 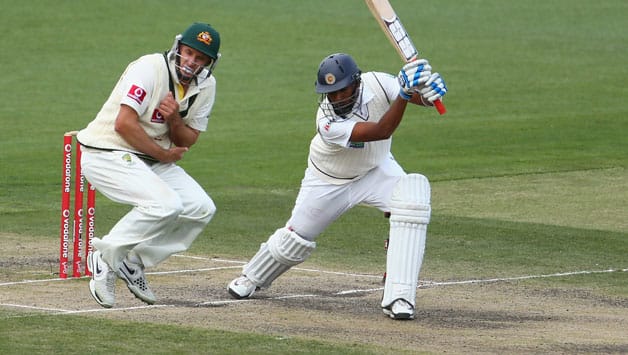 Australia were struggling to finish off the Sri Lankan resistance and push on for victory on the final day of the first Test in Hobart.

The Australians removed Sri Lanka’s key batsmen Mahela Jayawardene (19) and Kumar Sangakkara (63) but were hitting a brick wall to make further inroads into the tourists’ batting.

At tea, Australia were six wickets away from victory with Sri Lanka 186 for four with Thilan Samaraweera not out 38 and Angelo Mathews on 11.

Victory appeared out of the question for the tourists with Sri Lanka still 207 runs away from the 393-run target heading into the final session of the Test match.

Australian skipper Michael Clarke even brought wicketkeeper Matthew Wade into the bowling attack with his lively medium pace utilised for a maiden final over before the tea adjournment.

Samaraweera survived a review on 18 after being given out leg before wicket to Siddle in the 74th over after the TV umpire found he was struck outside the line.

But Siddle struck the crucial breakthrough, trapping Sangakkara leg before wicket for 63 in the 76th over.
Sangakkara went for a referral but it was re-confirmed and his 226-ball and 277-minute vigil was over, leaving the Sri Lankans four down for 151 as rain swept in off the River Derwent for a short delay to the match.

Australia removed captain Jayawardene midway through the morning session after Michael Clarke, playing with an injured hamstring, bent low to take a sharp catch off Peter Siddle in the 56th over.

Jayawardene resisted for 77 balls for his 19 and stubbornly put on 65 runs for the third wicket with Sangakkara off 193 balls.

It capped a low scoring match for Jayawardene, who only made 12 in the first innings.

Australia have held the initiative in the Hobart Test but there are memories of their inability to bowl out South Africa on the final day in Adelaide three weeks ago as the Proteas batted out for a draw and subsequently won the series in Perth.