Rain and wet-outfield had also washed out the second day's play of the game on Tuesday at the picturesque HPCA stadium.

The third day of the ongoing Ranji Trophy Group B match between Mumbai and Himachal Pradesh was washed out without a ball being bowled due to wet-outfield here on Wednesday.

Rain and wet-outfield had also washed out the second day’s play of the game on Tuesday at the picturesque HPCA stadium.

On Wednesday morning there was bright sunshine but an overnight hailstorm meant that there was a delayed start.

The first inspection was called at 11 AM, which was then deferred to 1 PM by match referee Gaurav Vashisht and umpires S Ravi and Vineet Kulkarni.

A final inspection was scheduled at 2.30 PM, but before it happened a dark cloud settled above the ground, which forced the umpires to call off the day’s proceedings.

Mumbai are sitting pretty at 372 for 5 in their first essay, courtesy an unbeaten 226 by in-form Sarfaraz Khan.

On the fourth and final day, Sarfaraz would be looking to score consecutive triple hundreds, a rare feat in any kind of cricket.

Meanwhile in other Group B encounters, Uttar Pradesh defeated Madhya Pradesh by seven wickets with young opener Aryan Juval hitting an unbeaten 74 in their pursuit of 175 at Indore.

At the Motibaug ground in Vadodara, Saurashtra thrashed hosts Baroda by four wickets.

In the national capital at the Karnail Singh stadium, Karnataka surpassed Railways first-innings total of 182 and now have a narrow 17-run first-innings lead with wicket-keeper S Sharath (56) and Prateek Jain (2) at the crease. They ended the third day at 199/9. 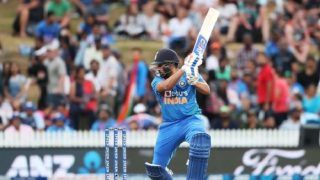 Mohammed Shami’s Final Over Got Us The Victory, Not My Two Sixes: Rohit Sharma