India‘s Test skipper Virat Kohli has a splendid time everytime it rains in Delhi. With the recent heavy rains in Delhi, Kohli is back at his home, enjoying a break from cricket, following the conclusion of the Indian Premier League (IPL) 2016, and opting to skip the ongoing tour of Zimbabwe. However, with the heavy rains in Delhi, Kohli is unable to do much of outing. So, he sent out a tweet on Monday, that showed him passing his time during the rainy days in Delhi, playing the Sony Playstation at home, and playing the latest version of Playstation’s one of the most popular games Unchartered 4. Virat Kohli congratulates LeBron James for leading Cleveland Cavaliers to maiden NBA title

India Test skipper Virat Kohli took to twitter to congratulate basketball legend LeBron James on leading Cleveland Cavaliers to their maiden NBA title, beating Golden State Warriors 93-89. James collected 27 points and was also adjudged the Most Valuable Player (MVP) of for his excellent show throughout the competition. Kohli is at home currently, having been rested for the tour of Zimbabwe, but he will be back to lead Team India in the four-Test series against the West Indies, beginning in July. Kohli has won the last two Test series against Sri Lanka and South Africa as captain and will look to complete a hat-trick against West Indies. Virat Kohli shares adorable childhood picture with his dad on Father’s day

When it is raining outside & you are playing playstation & your favorite game on it #Unchartered4 #RainyDay pic.twitter.com/PuXpBbEMGS

Kohli is known to be an avid follower of all sports. He recently wished the Indian hockey team luck ahead of their Champions Trophy Final. He also interacts with many footballers including Tottenham Hotspur and England forward Harry Kane. Kane has often praised Kohli for his excellent show with the bat and Kohli acknowledges it. 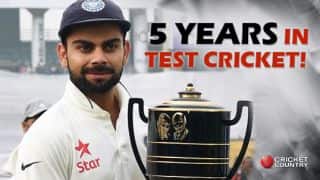