The all-rounder said that the Sri Lankan camp the match-winning value of Jayawardene.

Experienced Mahela Jayawardene‘s prolonged lean patch is not a concern at all and Sri Lanka hope that the right-hander will live up to his reputation in the summit clash of the Asia Cup against Pakistan on Saturday, all-rounder Thisara Perera said on Thursday.

“He (Jayawardene) normally bats very well it’s only in the last three to four matches that he has failed. He’s a legend of cricket. He can come back very strongly at any time.

He’s our key batsman along with (Kumar) Sangakkara,” Perera said at the post-match press conference after Sri Lanka beat Bangladesh by three wickets in an inconsequential match on Thursday.

“Hope he comes back to form against Pakistan,” Perera said giving full backing to the 36-year-old Jayawardene, who has aggregated 36 runs — 13, 9, 14 and 0 — from his four outings in the Asia Cup.

Chasing a paltry 204 for nine against Bangladesh, Sri Lanka witnessed a batting collapse as they were 75 for five at one stage before skipper Angelo Mathews saw the team home with an unbeaten 74 off 103 balls with seven fours and one six.

Perera agreed that their batsmen need to step up ahead of the final showdown to counter Shahid Afridi‘s devastating form with the bat.

Asked about Sri Lanka’s strategy against Afridi, he said: “Nothing special. We have done really well in the last three-four games of the Asia Cup. We have to learn sometimes, we need to capitalise on our batting. We have done well as a bowling unit.”

Sri Lanka are on a five-match winning streak at the Sher-e-Bangla National Cricket Stadium here and Perera hoped they become lucky in Saturday’s final as well.

“We wanted to go to the final unbeaten and now hope to finish on that note as well. The venue has been lucky for us.

“We have won here in the last five or six ODIs. Hope it turns out to be the same in the final as well.”

“That’s why he’s captaining the side. He batted really well in the last three-four years.”

On mystery man Ajantha Mendis‘s resurrection as a premier spinner of the side, he said, “He’s practising really hard.”

“He’s doing really well in the last three-four years. He has come back very strongly after his back injury.” 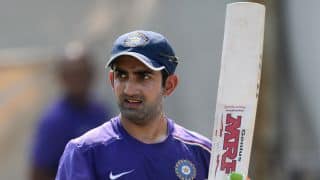