Tillakaratne Dilshan and Dinesh Chandimal scored vital half-centuries to guide Sri Lanka to a commanding 150 for 4 against Pakistan in Match 10 of Asia Cup T20 2016 at Mirpur on Friday. The struggling Sri Lankan side suffered another setback when Angelo Mathews’ niggle prevented him from playing the match. In his absence it was Chandimal who led the side. Having scored a half-century against UAE earlier in the tournament, Chandimal suffered a couple of lean matches but seemed keyed in for the ultimately inconsequential tie against Pakistan. LIVE CRICKET SCORECARD: Pakistan vs Sri Lanka, Asia Cup T20 2016, Match 10 at Dhaka

Both openers managed to get the odd boundary every over, but it was with the introduction of Mohammad Nawaz in the sixth over that Dilshan really cut loose. Dilshan greeted the rookie left-arm spinner by hammering him past long on for four before nailing him over long on for six and thrashing another boundary past the bowler. He finished off the over with a powerful sweep to square leg for four, as Sri Lanka got 18 runs off the over. LIVE CRICKET BLOG: Pakistan vs Sri Lanka, Asia Cup T20 2016, Match 10 at Dhaka

After a few sporadic boundaries in the next  couple of overs, Chandimal managed to get a top-edged four to third man off Wahab Riaz. He followed it up with a booming drive through cover and Dilshan finished the over with a slashy drive through point. Wahab soon had his revenge when he had Chandimal out mis-timing a pull to Sharjeel Khan for 58 off 49 balls with 7 fours and 1 six. Chandimal’s dismissal brought in Shehan Jayasuriya. The hard-hitting left-hander could not do much though, and ended up hitting one from Shoaib Malik straight to Sharjeel for 4 off 6 balls.

Dilshan kept going at the other end, and ended up getting to his half-century in good time, but he kept losing partners. Chamara Kapugedara was bowled by Mohammad Irfan for 2 off 3 balls and Dasun Shanaka was cleaned up for a 2-ball duck. Sri Lanka had gone from 110 for no loss to 125 for 4 within the space of 3 overs. Dilshan then took matters into his own hands; of the 15 legitimate deliveries he and Milinda Siriwardana batted together, Siriwardana faced only 4. Dilshan remained unbeaten on 75 off 56 balls, as Sri Lanka finished at 150 for 4. 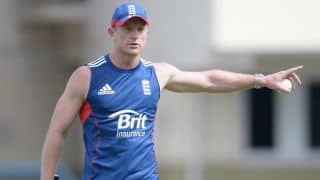