Tillakaratne Dilshan showed that Sri Lanka would not go down without a fight.

Tillakaratne Dilshan showed that Sri Lanka would not go down without a fight by hitting Mitchell Johnson for six fours in the same over in Match 32 of ICC Cricket World Cup 2015 between Australia and Sri Lanka at Sydney Cricket Ground (SCG) on Sunday. Johnson came in to bowl the sixth over of the innings, with Dilshan on strike. Live Scorecard: Australia vs Sri Lanka ICC Cricket World Cup 2015, Pool A Match 32 at Sydney

The first ball of the over was driven back past the bowler for the first boundary of the over. The next ball was very similar, with another boundary down the ground. Johnson followed up by bowling one a bit short, which Dilshan swung away through midwicket. Johnson banged one in short, and Dilshan responded by pulling him over square leg. The fifth ball was hammered away through covers before the last ball was played gracefully through the same area as Dilshan scored 24 off the over. Live Cricket Score: Australia vs Sri Lanka ICC Cricket World Cup 2015, Pool A Match 32 at Sydney

Mitchell Johnson dismissed Lahiru Thirimanne in the second over of the chase. Johnson bowled a fast short one that followed Thirimanne even as he tried to weave out of the way as the ball kissed the shoulder of the bat to Brad Haddin. Top 10 batsmen in ICC Cricket World Cup 2015

Earlier, Steven Smith and Michael Clarke continued their fine run while Glenn Maxwell and Shane Watson came up with a late blitz to lead Australia to a formidable 376 for nine against Sri Lanka. While Smith scored his 72 off 88 balls, Michael Clarke’s 68 came at a run-a-ball. Maxwell, as usual, scored his runs at a scorching pace and scored the second fastest World Cup ton of all time in the process. Top 10 bowlers in ICC Cricket World Cup 2015 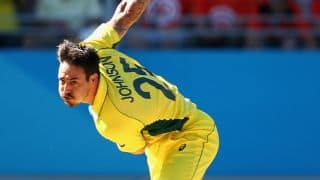 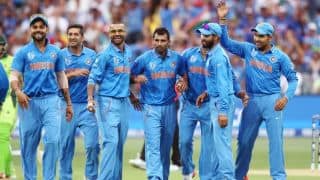