Tillakaratne Dilshan has already appeared in commercials voicing his support for Rajapaksa.

Tillakaratne Dilshan has decided to offer his support to the current President of Sri Lanka President Mahinda Rajapaksa in the upcoming Presidential elections from January 8. According to Rajapaksa’s campaign office Dilshan met the president on December 24 with a group of youth, who were interested in extending their support.

Dilshan, who will be a part of the Sri Lanka team scheduled to play the ICC World Cup 2015, has already appeared in television commercials in support of Rajapaksa. Rajapaksa opponent in the election will be Maithripala Sirisena.

Dilshan has played a total of 300 One-Day Internationals (ODI) and 87 Test matches for Sri Lanka with an average of 38.31 and 40.98 respectively. 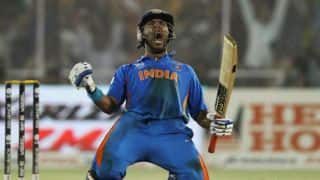 Ranji Trophy 2014-15, Round 3: Delhi beat Rajasthan by an innings and seven runs