Tim Bresnan insisted England could not take anything for granted after helping the hosts to the brink of a series-clinching win over the West Indies in the second Test at Trent Bridge. 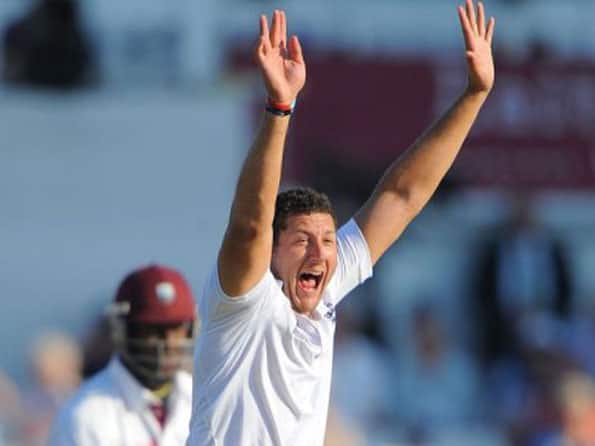 Tim Bresnan insisted England could not take anything for granted after helping the hosts to the brink of a series-clinching win over the West Indies in the second Test at Trent Bridge.

The Yorkshire all-rounder struck a useful 39 not out as England made 428 — featuring captain Andrew Strauss‘s 141 — for a first innings lead of 58 here on Sunday.

And the fast-medium bowler then took three wickets for nine runs in 26 balls as the West Indies slumped to 61 for six at the close of the third day — a lead of just three runs with only four wickets standing.

England, who won the first Test at Lord’s by five wickets, are now firm favourites to win with more than a day to spare on Monday and so take an unbeatable 2-0 lead in this three-match series.

But standing in the way of the world number ones are Marlon Samuels and West Indies captain Darren Sammy who both made hundreds while sharing a first innings partnership of 204 that revived the tourists from the depths of 136 for six.

“We know Sammy and Samuels can put a stand on, we’ve still got a lot of work ahead to get those wickets,” Bresnan told Sky Sports. “There’s still a lot of hard work to do.”

James Anderson took two wickets for 12 runs in seven overs before stumps on Sunday, removing both openers, while Bresnan followed up with figures of three for 10 in six overs.

But it was Stuart Broad who took the prize wicket of Shivnarine Chanderpaul, the world’s number on batsman caught hooking for just 11.

Bresnan has been on the winning side in all his 12 previous Tests. But coming into this match his place was under threat after a match return of one for 144 at Lord’s.

However, he insisted: “At Lord’s I felt great. I thought I was hitting my straps and putting the ball where I wanted, I was just a bit unlucky. But that’s the game, you keep doing those things and I got my rewards in the last five overs today (Sunday).”

“We like to use anything we can, whether it’s swing, a little bit or seam or reverse, and it just happens it was reverse today that got us those wickets,” the 27-year-old fast-medium bowler said.

“I spotted Marlon watching it but I wasn’t sure, then you hide one and he leaves one that’s gone in and nearly clipped off stump and you think ‘okay, maybe I’ll try a bit more of that’.

“It’s maybe not conducive to bowling as fast as I can, but there’s not too much difference and that little bit of disguise helps. You can use your effort ball as well.”

West Indies had done well to restrict England to a seemingly modest first innings lead on what was still a good pitch, with seamer Ravi Rampaul leading the attack well on his way to figures of three for 75 in 32 overs.

“It’s tough watching your top six batsmen get out like that,” said Rampaul. “The two batters we have at the crease both scored a hundred in the first innings so we are still confident.

“Hopefully, they can apply themselves tomorrow (Monday) and get us out of the spot we’re in.” (AFP)