Australian captain Tim Paine has expressed his desire to remain at the helm of the international side amid reports that he might be stripped of the post ahead of the home series against South Africa in November. Paine, in the absence of Steve Smith and David Warner slapped with 12-mont bans was appointed captain of the one-day side for the series against England which Australia lost 0-5, and him contributing just 36 runs in five innings.

“I am completely comfortable either way. I obviously would like to do it … if I continue to do it, great, but if not, it’s a real opportunity for me to focus on Test cricket and do that as well as I can,” Paine told Sydney Morning Herald.

“I feel I can do the job, no doubt about that. The wicketkeeper role in our best one-day team is batting down the order and doing a good job with the gloves. No doubt that’s a job I feel I can do. But if it’s not to be, it’s not to be. I am happy either way.”

The 0-5 whitewash was Australia s second in a bilateral ODI series. But it was the first time that they d endured a series loss in four consecutive series. The last time it happened was under Smith, when Australia lost all their five ODIs against South Africa at home in 2016. Recalling the drubbing, Paine, 33, mentioned how England were playing some outstanding cricket, outplaying Australia at every step of the way.

“England were playing an unbelievable brand of cricket at the time. Everything was going really well for them. They were too good for us,” Paine said.

“Coming out of that tour, we found out about a number of our players. As I said, a lot of our guys will come back into that team for the World Cup. Australia will be taking a very competitive team to that World Cup, no doubt.”

His captaincy however, is under not under any kind of threat in the longer format. Paine is set to lead Australia in a two-Test series in the UAE, which will likely see Mitchell Starc return to action. Paine will have plenty to look forward to not only from his premier pace bowler, but also from a returning Mitchell Marsh, who has been in red-hot form for Australia A. The 26-year-old allrounder has taken the team to tremendous heights and could stand in as one of the candidates for Paine s replacement.

“He [Marsh] certainly had a hell of a summer last year, particularly with the bat. He is someone who has been spoken about. To see him captain Australia A, he is starting to come of age as a cricketer,” Paine said.

“Regardless of whether he is vice-captain or not, he is a great team man and always puts the team first. I am sure that won’t change.” 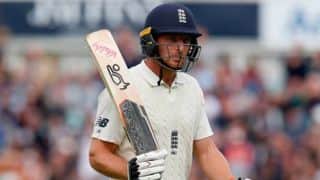 Jos Buttler has been England's man of the summer: Mike Atherton