It proved a baptism of fire for Paine as Australia's day of shame ended in a crushing 322-run defeat by South Africa.

Stand-in Australia captain Tim Paine admitted on Sunday that his team was “struggling with the enormity” of the ball-tampering scandal which has engulfed them. Paine was drafted in to replace Steven Smith who stood down as skipper for the remainder of the match after admitting he was the mastermind of the tampering plot which has rocked the foundations of the sport. It proved a baptism of fire for the 33-year-old Tasmanian wicket-keeper as Australia’s day of shame ended in a crushing 322-run defeat by South Africa on the fourth day of the third Test at Newlands.

Set an unlikely 430 to win, Australia were bowled out for a paltry 107, with fast bowler Morne Morkel taking five for 23.”It was extremely difficult but it’s no excuse for what happened in the last 45 minutes of play,” said Paine whose team’s challenge fizzled out with 10 wickets falling for just 50 runs.”We’re still the Australian cricket team and we’re expected to put up a better effort than we did. Certainly it was in some horrible circumstances and probably some circumstances we brought on ourselves.”

Those circumstances included Smith being banned for one match and fined 100 percent of his match fee for his role in hatching the plot which saw Cameron Bancroft caught red-handed trying to alter the condition of the ball during Saturday’s play with yellow sticky tape which he shoved down the front of his trousers in an attempt to conceal it. Bancroft, who admitted the charge, escaped a ban but was fined 75 percent of his fee and warned about his behaviour.

“It has been a horrible 24 hours. We’re struggling but the reality and the enormity of what’s happened has probably started to sink in,” added Paine.”I don’t think we expected this to be as big as it has been, the fall-out we have seen from back home.”

Paine admitted that he has no idea if he will still be in charge for the fourth and final Test starting in Johannesburg on Friday. By then, it’s possible that Smith may have resigned, been sacked or even handed a longer ban for his role in one of the sport’s worst cheating scandals.

Smith made only seven runs on Sunday while David Warner, who also stood down from his role as vice-captain, top-scored with 32. Both men, as well as Bancroft, were loudly booed by the Newlands crowd. 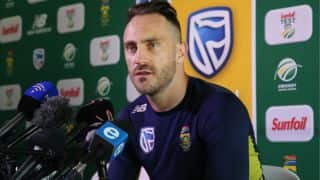 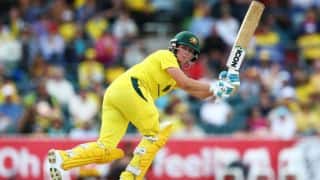