New Zealand have taken 1-0 lead against Pakistan in the three-match T20I series.

New Zealand bowlers ensured they maintained the dominance over Pakistan. They won the 1st T20I at Westpac Stadium, Wellington, by 7 wickets. Mohammad Aamer and Rumman Raees did try to dent New Zealand’s chase on a two-paced wicket early on, but Colin Munro (49*) continued his form against Pakistan and ensured his side was home with 25 balls to spare. Ross Taylor (22*) provided a helping hand. Earlier, stand-in captain Tim Southee and Seth Rance kept New Zealand on top. They combined forces and bundled Pakistan for 105.

Defending 106, Rumman struck twice early on to remove Martin Guptill (2) and Glenn Phillips (3). Unfazed by the early fall of wickets, Munro batted on, with support from Tom Bruce. Bruce picked the pace the moment he arrived. He lofted Aamer for his first boundary to mid-off. It was followed by a barrage of sixes and fours from Bruce. However, New Zealand managed to score just 28 in the Powerplay the overs. Then, As soon as Shadab Khan entered the attack, he dismissed Bruce for 26, decorated with 3 fours and a six.

Munro and Taylor then rotated the strike efficiently. Munro also pounced on every loose ball. At the introduction of Mohammad Nawaz, Munro freed his arms and built up the acceleration. However, Munro missed his fifty by a single as Taylor hit 3 fours and Hasan Ali bowled a wide.

Put to bat, Pakistan s batting woes found no respite. Their batsmen fell like a pack of cards. Only two batsmen managed to cross ten. Babar Azam played a lone hand as his partners were gone in succession. Pakistan, tattering at 22 for 4 after the Powerplay, would not have reached 100-run mark had it not been for the 30-run stand between Hasan and Azam. Babar was the last man out for 41 with two balls remaining in the innings.

Meanwhile, Hasan distinguished himself with score of 23 to help Pakistan pass their lowest T20 score of 74, against Australia six years ago. Mitchell Santner triggered this, dismissing Sarfraz Ahmed and Shadab Khan with consecutive balls before Faheem Ashraf denied him one.

New Zealand take 1-0 lead in the three-match T20I series. The second T20I will be held at Eden Park in Auckland.

Man of the Match: Colin Munro. 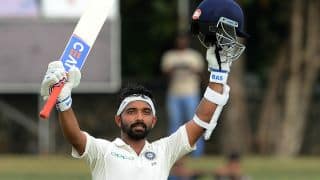