Chanderpaul was stranded on an unbeaten 84 as wickets tumbled around him.

New Zealand have taken complete control of the 1st against West Indies at Jamaica after a clinical bowling performance, led by Tim Southee and debutant spinner Mark Craig dismissed the hosts for 262. The Kiwis now have a gargantuan lead of 246 and have opted to bat again, with West Indies falling 47 behind the follow-on mark. Chris Gayle led front from the front and looked poised to score a century on his 100th Test but departed for 64. Shivnarine Chanderpaul scored yet another half-century but ran out of partners during a typical gritty stay of an unbeaten 84.

With Denesh Ramdin and Chanderpaul going strong and building a solid partnership at one end, the wicket of the West Indies captain  at the Tea break was a telling blow. Southee was on target yet again and Ramdin was outfoxed by a slow delivery that got a glove and looped up in the air. BJ Watling took a safe catch and a 72-run partnership was broken.

That being the last recognised batting pair, New Zealand went for the kill and were attacking relentlessly to polish off the tail. They were immediately after the Tea break when Kemar Roach edged the ball to Peter Fulton at first slip and a lower order collapse looked ominous. Jerome Taylor didn’t last long as New Zealand skipper Brendon McCullum took an excellent catch. McCullum dived forward, full length and snapped the ball centimeters off the ground. Trent Boult got his first wicket of the match.

Chanderpaul, meanwhile calmly went about his business in typical fashion in vintage style. He was unperturbed by the mayhem at the other end and brought up his 63rd half-century. With that, the 39-year old Guyanese joins the top five list of maximum number half-centuries in Test cricket.

Suliemann Benn gave the sparse crowd to roar with irony with a couple of cracking shots of Boult, that reached the fence. With his Curtly Ambrose batting swagger, Benn then targeted the spinners and horns were blaring at the Sabina park. Going for one shot too many and was beaten by the flight on Craig’s delivery and was bowled to give the debutant off-spinner his fourth wicket. Shillingford, like Benn didn’t hold back and tried to clear the infield.

The second new ball was taken by the visitors and Chanderpaul cracked three boundaries of Trent Boult. The outstanding Southee took the final wicket of his second delivery in his comeback spell to finish with four wickets. Chanderpaul, yet again was robbed of a century because of a lack of partners.

Whenever wickets fell they fell in heaps for the hosts and that was their biggest Achilles Heel during the innings. There were three ducks and it was the first time since Steve Hamison’s fiery spell of 7 for 12 in 2004 to clean the Windies for 47  that this occurred. 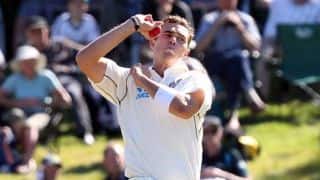