Tim Southee was the star for New Zealand as they beat Bangladesh in the third and final ODI in Dunedin for a 3-0 clean sweep on Wednesday.

Tim Southee was the star for New Zealand as they beat Bangladesh in the third and final ODI in Dunedin for a 3-0 clean sweep on Wednesday. (ALSO READ: WC tracker – New Zealand, Bangladesh end ODI season)

Defending 330, Southee bowled a deadly first spell that saw the tourists losing their top-three inside three overs for just two runs including two in the very first over of the huge chase. The right-arm pacer has been out of sorts in white-ball cricket of late but marked a return to form with a six-wicket haul in the series finale, finishing with figures of 6/65.

“Nice to contribute to the team and series win,” Southee, who was chosen as the player-of-the-match said at the post-match presentation. “Been a little off in the last one year, working on things to get them right. We try to get the best out of each other, there’s a healthy competition in the team. It was a great batting display as they played their roles throughout the innings.”

Stand-in captain Tom Latham was also pleased with the all-round display of his team, saying Southee back to his best was refreshing.

“To see Tim come back and bowl at a good pace and swing the ball was very refreshing,” he said.

After losing Colin Munro early, the hosts were propped up by solid batting display from Henry Nicholls, Ross Taylor and Latham, each of them hitting a half-century.

“Probably couldn’t have asked any better. We managed a few partnerships in the middle and we had a bit of fun towards the end. We are doing alright in all departments and the challenge for us is to keep getting better each time the bowlers take wickets upfront and the challenge for us also through the middle periods where we want to take wickets. We are always trying to learn and this series is no different,” Latham said. 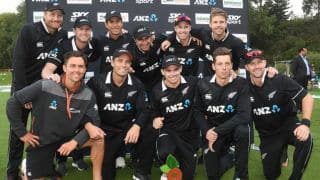 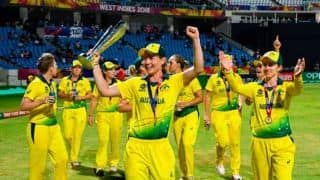