Sourav Ganguly has urged the Indian batsmen need to find the confidence that has helped them succeed overseas earlier.

Their inability to score runs has severely hurt India’s chances in the Test series, but if there was a perfect occasion for India’s batsmen to put those sorry scores behind them and seek salvation, now is the time. As India chase the series ahead in Trent Bridge, venue for the third Test against England starting Saturday, former India captain Sourav Ganguly has urged the Indian batsmen need to find the confidence that has helped them succeed overseas earlier.

Ganguly, who led India to England in the summer of 2002 and drew the Test series 1-1, writing in Saturday’s column for the Times of India, pointed out that India might still turn things around, but for that to happen, their batsmen are required to fare well in the remaining three Tests.

“The third Test will test India’s resilience. Virat and his boys have had a tough time, especially at Lord’s, countering the swing bowling but they need to remember that in South Africa they came back strongly to win the third Test. They are 0-2 down, but there are still three matches to go, which is a lot of cricket. If rain does not take three days away, all the games will have results,” Ganguly said.

“Much has been spoken about the capability of the Indian batsmen to battle it out in difficult conditions, but at Lord’s, it was the supreme ability of Anderson and company which got the better of them. What hurt the Indian fans, however, was the lack of fight rather than the loss. This team is much better than the way they have played so far.”

Ganguly also raised the issue of India being overdependent on Virat Kohli. And rightly so. In four innings, Kohli has scored 250 runs, while no other batsman was able to even surpass the 50-run mark. All three openers have underperformed, with Murali Vijay bagging a pair at Lord’s, and so has Ajinkya Rahane. Dinesh Karthik has looked the most horrendous of the batsmen and is set to be replaced by Rishabh Pant. Surprisingly, after Kohli, R Ashwin and Hardik Pandya have looked the most assured.

While parallels have been drawn between this side and the one that Ganguly led 16 years back, the major difference was the rate of success all its batsmen achieved.

“Can the Indians fight back? The worry is they have succumbed to the fact that it will be tough. Yes, it will be tough but not impossible. The mind has to believe that. A lot is being said about Kohli’s influence, but he alone will not win matches. Tendulkar did not. India played sensationally well in that era because the players around him scored as well. Vijay, Pujara, Rahane, Rahul, and Dhawan have to believe; they have done it earlier in difficult situations and only that belief can help them change the mental frame they are in,” Ganguly said.

With Shikhar Dhawan likely return for the third Test, having missed out Lord’s, Ganguly feels the dynamic left-hander will need to curb his natural instincts and that his first task should be to spend some time in the middle.

“India will need a good start at the top which has not happened yet. Whether a Dhawan instead of Vijay will help them to counter-attack is another question, but whoever is entrusted with the job will need to stand tall and that will provide respite to the middle-order to take the fight back to England,” said Ganguly, who played 113 Tests and 311 ODIs for India.

“There is a chance that Dhawan might play and if he does, the big booming cover drives have to be put away. He needs mental discipline to play other shots which he is capable of and play much more on the back foot. Will India play Karun Nair as the sixth batsman? That could be a good option.”

India’s bowling department has done reasonably well though. Ishant Sharma has started responding well to his role as the leader of the pace attack, while Mohammed Shami has looked in good rhythm, throwing down testing spells to England’s batsmen. Heading into the third Test, it is likely that Jasprit Bumrah will be added to the Playing XI, replacing Kuldeep Yadav, considering how excited Kohli sounded on the eve of the game.

“The bowling looks in good shape with Bumrah coming in. Shami has been the best on show and Ishant has to find the form he showed in Birmingham at the earliest. But Virat has to get the field right. Too many easy singles have been given away, especially off good deliveries in the point region,” Ganguly said. 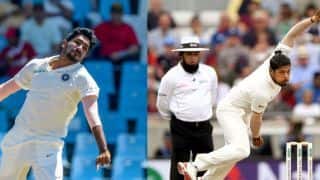 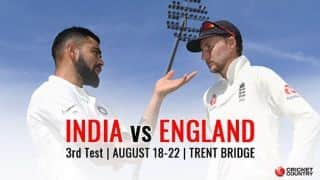