Tuti Patriots (TP) have a lot on their hands in the India Cements TNPL as they face Dindigul Dragons (DD) at the India Cements Limited Ground at Sankarnagar, Tirunelveli, on Sunday. Also, it will be TP’s second game in as many days as they also have to face Karaikudi Kaalai (KK) on Saturday in a day-game at Tirunelveli. It may be noted that Dragons are flying high with three comprehensive wins on the trot. Their opening batsman, N Jagadeesan, who is also the highest run scorer in the tournament has been in sublime form and has won three man of the match awards. ALSO READ: Ravichandran Ashwin shares memory of watching Sachin Tendulkar live as a kid at

His acceleration and pacing of the innings has helped DD post formidable totals. Even their middle-order has chipped in but then it has not been tested as of yet. Their bowling has been exceptional and MS Sanjay and M Ashwin have done well in the absence of marquee bowler R Ashwin. T Natarajan, who had a good outing in the previous match against VB Thiruvallur Veerans, is also an important value addition. On to the Patriots and they lost the plot against the Lyca Kovai Kings after a win against Chepauk Super Gillies (CSG) in the first game.

But it is heartening to see that Abhinav Mukund, who is expected the join the squad soon, will join Washington Sundar at the top of the batting. Also, TP will be dependent on the two southpaws to give them a blazing start in the first few overs. The middle-order has to step up in Dinesh Karthik’s absence and give adequate support to the bowlers. TP bowling revolves around Aushik Srinivas, Aswin Crist and Akash Sumra with the experienced Lakshmipathy Balaji expected to lead the pack. All their bowlers have done well so far and have been economical with wickets coming in at crucial moments.

TP’s head coach JR Madanagopal after their loss against KK said, “In the last two games our batting hasn’t come along well. So we will make strategies based on the slow wickets we are going to face. We hope to deliver in the next game and it may be noted that these are still early days in the tournament. Only three games have finished and there is still lot of time. We hope to get a win in the next and wrest back momentum.”

While speaking about the TP’s spinners, he added, “We have evolved strategies for every game and apart from our left arm spinners even others are having a good time. You could see how our skipper (Abhinav Mukund) was juggling them between the power-play and the middle overs. We bowled well but then could not muster that one hit needed to win in the end!”

Facing DD is a task as they have won all the games so far and TP’s all-rounder Akash Surma is positive regarding Sunday’s match against DD and said, “It is tough to fight back after two losses but then we are not thinking of winning or losing. Our strategy will be the same and we will fight back and think positive.” ALSO READ: DD vs TP, LIVE Streaming: Watch TNPL 2016, Match 13, Live telecast on TV & Online

Aswin Crist also had his viewpoints after their loss against KK and said, “The wicket seemed slow compared to the other matches and the ball was not coming on to the bat. Most shots were mistimed and both teams struggled to score runs. It was a top-class innings because on this wicket it’s not easy to score runs. You need to stay on the wicket for some time to score runs and he did that.”

As for today’s match, Crist added, “We have to forget about this game and look ahead. We have to see how the wicket is on Sunday and react accordingly. We just have to play the wicket on its merit.”

In contrast DD’s M Ashwin was at his best picking 3 wickets against VB Thiruvallur Veerans. He spoke about his strategies as well and his star performer Jagadeesan saying, “The first one (at Natham) was a good batting track and the one in Chepauk was turning a lot. The boundaries there were a bit bigger. Here also it was a turning track but with shorter boundaries. Also, the ball was stopping a bit. Jagadeesan has been incredible for us and that is the reason for our success. He has given us good starts and that has helped us to do well.”

He disagreed that their side is not dependent on Jagadeesan, “I wouldn’t say that because the entire team is capable of contributing. In our second match, all of the bowlers together hit five sixes. We have a good middle-order, but it is not tested yet. We haven’t chased down a target yet but I am sure we are capable of delivering in batting.”

Surprisingly, DD have never batted second in this innings so far and concluded, “I wouldn’t say that because the entire team is capable of contributing. In our second match, all of the bowlers together hit five sixes. We have a good middle-order, but it is not tested yet. We haven’t chased down a target yet but I am sure we are capable of delivering in batting.”

It is definitely a clash between DD batting and TP bowling. Jagadeesan is the player to watch out for thanks to his purple patch. It may be noted that Patriots’ bowling is exception on wickets which assist spin and pace. 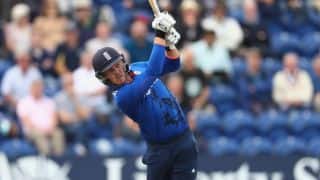