Hello and welcome to the ball to ball updates of TNPL 16th played between Madurai Super Giants (MSG) and Karaikudi Kaalai (KK).

Hello and Welcome to CricketCountry’s live match coverage of the 16th match of the Tamil Nadu Premier League (TNPL) which will be played between Madurai Super Giants (MSG) and Karaikudi Kaalai (KK). The MA Chidambaram Stadium, Chennai will be the venue for today’s clash and you can expect another thriller coming towards you. Both the teams have played three matches so far in the tournament. MSG has lost all the matches while KK has won one of the three and have lost the two. While MSG have not had a good tournament at all, they will have to come back strong in today’s game. Karaikudi Kaalai lost the first two matchers but saw some ray of hope for themselves as they won the last encounter. Let’s see what this clash has in store for us. Stay tuned folks! Who knows, another super over might just be on its way. READ: Tamil Nadu Premier League (TNPL) 2016 Points Table & Team Standings

The Super Giants are yet to open their account and Karaikudi Kaalai won their last game to ensure that they are up and running as far as the points table is concerned. However, Kaalai are at number 6 and the Super Giants are at the bottom of the stack. So, all to play for as two points from this game will push the teams ahead in the points table. This game is extremely important for both the teams as their existence in this league remains hanging on this match.

In match number 15 which took place yesterday, what was another low-scoring thriller in the India Cements TN Premier League, Lyca Kovai Kings beat Chepauk Super Gillies by 11 runs in a match full of twists and turns at the India Cements Limited Ground at Tirunelveli on Monday. This match was a stark contrast to the first game of the day, which was a high-scoring battle between VB Thiruvallur Veerans and Ruby Kanchi Warriors. Gillies, who were chasing 138, got off to a good start thanks to wicketkeeper Gopinath (29).

But things changed dramatically when Ajith Ram (2 for 9) and Harish Kumar (3 for 23) were introduced into the attack. Ajith drew first blood as he dismissed the hard-hitting Gopinath. In the space of four runs, Gillies lost three wickets as Harish Kumar picked two in one over.

Harish and Ajith didn’t give any room to the Gillies batsmen as they stuck to a tight line. After R Satish was dismissed for a duck, Kings tightened the screws as Gillies needed 63 runs to chase in five overs with four wickets in hand. But Gowjith Subash (26) and Antony Dhas (28 not-out) blasted 33 runs in two overs with the former being dropped by M Mohammed on 20.

Kings spilled another chance as Dhas was given a life-line when he was on 10. Though they were successful in running out Subash still Harish just gave just three runs in the 18th over and tilted the match in Kings’ favour. The 19th over had Gillies losing two wickets for two runs which sealed their fate. 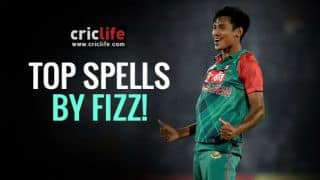