Tom Latham gets to 1,000 ODI runs during India vs New Zealand clash at Delhi

Tom Latham gets to 1,000 ODI runs during India vs New Zealand clash at Delhi

Tom Latham was the only shining armour for his side along with Tim Southee with a fine fifty as he remained not out in the first ODI.

New Zealand‘s in-form opener, Tom Latham, got to 1,000 One-Day International (ODI) runs during the second match against India in the ongoing five-ODI series. Winning the toss, India’s limited-overs skipper, MS Dhoni, won the toss for the second time and elected to bowl first. Umesh Yadav gave a fitting start to India with a peach of a delivery to dismiss Martin Guptill in the second ball of the match. Latham, however, showed his good touch with the willow with a fine cover drive in the last ball of the first over to get to this milestone. At the time of publishing reports, New Zealand were 25 for 1 in 6 overs. Full Cricket Scorecard, India vs New Zealand, 2nd ODI

Having lost the first ODI by six wickets, New Zealand will like to rectify their mistakes and post a healthy total on board. In the first ODI, New Zealand were 48 for 5 and further reduced to 65 for 7 but somehow managed to score 190 in 43.5 overs. Latham was the only shining armour for his side along with Tim Southee with a fine fifty as he remained not out. New Zealand got bundled out in 43.5 overs while Latham was nonchalant and stood his ground before the last player got out.

New Zealand’s paltry total was nowhere going to challenge India as they chased the target in 33.1 overs with Virat Kohli again being the highest run-scorer with a polished innings of 85 not out to see his side past the finish line. Latham again has a task in hand to bail his team out after a tricky start and get to a big score in Ferozshah Kotla. 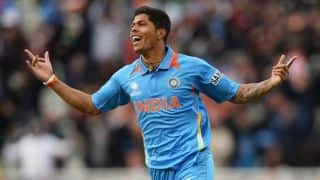