New Zealand made a decent start of the second Test of the three match Test series against Pakistan at Dubai as they reach 82 for one at Lunch on Day 1. At one point of time the Kiwis were playing risk free cricket and it was looking like both openers Tom Latham and Brendon McCullum would play out the first session safely. But just before Lunch McCullum threw his wicket away.

Earlier New Zealand skipper McCullum won an important toss and decided to bat first as expected.  Both kiwi openers Latham and McCullum were looked determined and confident when they came out to bat. They played out the first hour of the match carefully and reached 39 for no loss after 13 overs. Pakistan introduced spinners early to unsettle them but New Zealand openers were batting brilliantly against them. McCullum in particular was not afraid to play his shots against Yasir Shah and Zulfiqar Babar. He hit two sixes in his innings of 43.

Pakistan skipper Misbah-ul-Haq looked bit worried when the Kiwis reached 77 for loss at point of time. But just then McCullum played a suicidal shot to get out. He picked out the lone man in the deep mid-wicket placed for the pull hook in the bowling of Ehsan Adil. This wicket gave Pakistan a lifeline. Still the session belonged to the visitors despite of the brain-outage by McCullum. Kane Williamson joined Latham at the crease and both of them safely guided the team to Lunch.

New Zealand is playing the second Test of the three match series at Dubai, which is started form Monday. Pakistan made three changes in their playing eleven from the last Test. The openers, Hafeez and Ahmed Shehzad missed out due to injury issues, so Taufeeq Umar and Shan Masood came in. Imran Khan also has been rested for Adil. On the other hand, New Zealand have fielded an unchanged team. 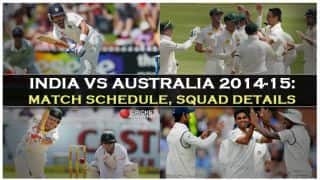