Tom Latham and Kane Williamson's 141 run stand ensured that Sri Lanka will need to score above 400 to win the first Test.

A century by Tom Latham ensured that New Zealand are in a dominant position going into early lunch as rain plays spoil sport with Sri Lanka needing 405 runs to win the first Test at Dunedin. Sri Lanka have just played the 1.1 overs before rain halted play with Dimuth Karunaratne and Kusal Mendis looking to give them a good start. New Zealand were the favorites to score big coming and their batsmen did not disappoint them.Tom Latham made a well earned 109* remained not out for New Zealand after skipper Brendon McCullum hitting a six called in for a declaration. McCullum came into bat after Ross Taylor got bowled to a straight-one by Rangana Herath for 15. Herath was Sri Lanka best bowler picking up two for 62. Live Cricket Scorecard: New Zealand vs Sri Lanka 2015-16, 1st Test at Dunedin

Kane Williamson who was looking good for a century, in the hurry to make quick runs for the team gave away his wicket. Latham and Williamson shared a 141 run-stand for the fourth wicket as New Zealand got over the 350 lead mark.The day started with New Zealand batsman Kane Williamson getting on to his half-century in the very first over of Day 4. Kane Williamson fifty came of just 84 balls. Tom Latham along with Williamson looked good for New Zealand batting most of final session on Day 3. Live Cricket Score, New Zealand vs Sri Lanka 2015-16, 1st Test at Dunedin, Day 4

New Zealand by then lead Sri Lanka by 308 runs with a first innings lead of 115. Sri Lanka opening bowling pair of Dushmantha Chameera and Nuwan Prasad will look to pick up wickets and stop the flow of run. 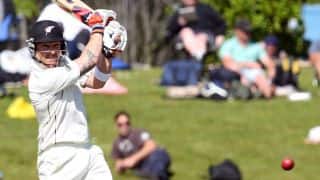