Too much was at stake to play for a win: Dhoni

Too much was at stake to play for a win: Dhoni

Indian captain MS Dhoni defended the decision not to press for a win in the third and final Test against the West Indies here, saying that his side could have lost the match while going for the target. 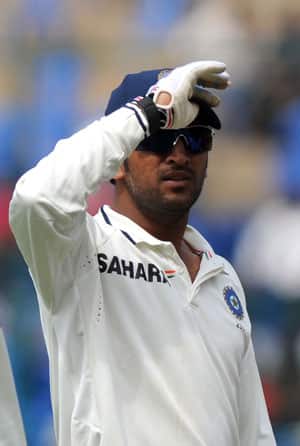 Indian captain MS Dhoni defended the decision not to press for a win in the third and final Test against the West Indies here, saying that his side could have lost the match while going for the target.

India, who had already taken an unbeatable 1-0 lead in the three-match Test series, were 94 for three just before the start of mandatory 15 overs while chasing 180 for a win before Dhoni decided to end the run chase.

“Not disappointed about stopping the run chase. We were risking a series win going after the target. We realised that it was not worth going for it after those wickets, we gave it a go but we are happy with the series win,” Dhoni said after the match at the Windsor Park on Sunday.

“We did well in this game. West Indies batted well actually, we are not disappointed in any way,” he said.

West Indies skipper Darren Sammy said he was a bit surprised that India opted not to press for a win.

“I was a bit surprised that India ended their run chase but we will take it. We are very happy with the draw,” he said.

Talking about the pitch and India’s team composition, Dhoni said, “We were not sure about the wicket. If we go with a 2-2 combination and the track turns out to be flat, that can be a problem. We knew we had bowlers who could spin the ball if it started taking turn, like Raina.

“Harbhajan was getting a bit of spin and bounce and he got valuable wickets, not much help for the fast bowlers, they did well,” he said.

Dhoni said the series was a good exposure for youngsters and he felt good to see Ishant Sharma take responsibility.

Ishant, Man-of-the-Series for his 23 wickets, said, “This is my first series where I took the highest wickets. It’s kind of an Indian track, slow and flat, but you have to put in the effort as these things are beyond your control. I am pretty confident about myself, looking forward to England.”

Man-of-the-Match Shivnarine Chanderpaul said, “The whole series I was getting out in 20s and 30s, very happy to carry on past the three-figure mark. It’s at the back of my mind it has been happening for a while now.

“It’s always an honour (becoming the most capped Test cricketer for Windies), just shows what hard work can do for you,” said Chanderpaul who scored unbeaten 116 in West Indies’ second innings to deny India a victory.