Despite having West Indies in trouble at 113/5 on day one of the 2nd Test, India failed to finish strong as West Indies Roston Chase (98*) and Jason Holder (52*) pushed the Windies total to 295.

“The conditions (for batting) were good and we neither had conventional swing nor reverse. The wicket was flat and it was such a pitch where you couldn’t have contained runs. As much as you try, the scoreboard kept ticking as they got the singles and doubles, said Yadav after day one s play.

Yadav did concede that had Shardul not gone out with injury, it would have helped the spinners.

“Had Shardul been there, it would have been more help for the spinners. Like I got three wickets and if he could have chipped in with a couple, it would have only helped our team. But you can’t really do anything in these situations as this is part and parcel of the game, said.

Despite, one bowler down, Yadav did his bit by breaking two key partnerships with the wicket of Shane Dowrich and Jason Holder, late in the day. He said he was looking to tail wickets all the time as containing runs in the huge ground would have been tough.

“If he (Shardul) is not there, I will have to bowl his quota of overs too and I knew he was not going to come back. I didn’t want negativity to creep inside me that we are now one bowler short.

“I decided that I had to take a chance. If I also try to contain runs, it will be difficult as the partnership (Roston Chase-Jason Holder) will only get bigger. So my aim was to get as many wickets as possible and I just tried. So it was something different that I tried,” he said.

Yadav was also critical of the ‘SG Test’ ball used in the Indian sub-continent saying that the ball gets soft after 20 overs and no pace or bounce can be extracted from the ball, which in turns helps the batsman.

“You must realise that in India, with SG Test balls on these kind of flat tracks, you neither get pace nor bounce. So the option to use variations ends. So (with SG) all you can do is to bowl one spot but then you will realise that nothing is happening even off the pitch nor is it swinging. So when middle and lower order comes in they know that ball has become soft and it doesn’t come at a pace and batting becomes easier. Tail-enders know that it will neither swing nor reverse. You just have to wait for something to happen and keep trying. But you can’t really do it on such a big ground, the ones and twos keep coming, he added. 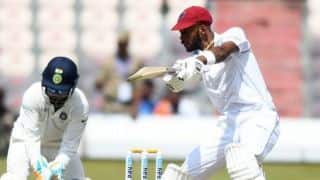 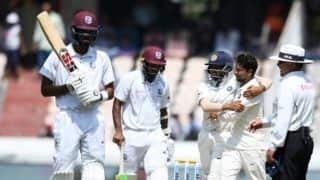