Travis Head scored a sparkling century against Sri Lanka A in a match Australia A lost by four wickets on Friday.

Colombo: Travis Head scored a sparkling century against Sri Lanka A in a match that Australia A lost by four wickets on Friday. The left-handed batsman had revealed that it is tough to get into Australia’s ODI side at the moment as it already has some top players in David Warner and Aron Finch. His century against the home side has now sent a message to the selectors that he might be ready for another shot in the ODI team.

Head’s 110 from 86 helped Australia A to 312, a total that was chased down by Sri Lanka A with seven balls to spare in a four-wicket win that squared the two-game List A series at 1-1.

He had opened for Australia in their three-match ODI series with Pakistan when David Warner was rested from the white-ball component of the tour and finished the series as the team’s second-highest scorer. But with Warner back and a full-strength batting unit to pick from, Australia’s selectors have deemed Head who had been named in both the ODI and Australia A squads for the overlapping tour surplus to requirements.

Soon after Head had posted his 11th List A century, word came through from Cricket Australia that Head would remain with the A squad as they head south to Hambantota and will play in the four-day, first-class match starting June 14.

“I’m realistic in that Davey (Warner) and Finchy are back together at the top of the order, and then you’ve got a middle-order that’s so set in that side, it’s a hard one to get into,” Head told Cricket Australia prior to flying out to Sri Lanka.

He added, “I’m probably the unfortunate one who’s just out of that ODI starting XI, but it’s great to be back in the squad and I hope I’ve been able to force the selector’s hand a bit over the last 18 months or so with domestic form and then in Pakistan. I’ll try to keep banging the door down, and that’s all you can really do.”

Head’s ton was his third in 50-over cricket since the start of the Australian summer, and his past 12 months in the format, including a stint last winter in England, have yielded 897 runs at 59.80. He started Friday’s List A match like he was playing a 20-over fixture as he and opening partner Josh Philippe raced out of the blocks to put on 85 in the first 10 overs at the Sinhalese Sports Club in Colombo.

Philippe, playing some textbook straight drives including an exquisite on-driven six, departed for 34 but Head powered on to bring up his century from just 76 balls, having pummelled 14 boundaries and two huge sixes, his 11th List A century. After he fell with Australia at 5-200 in the 30th over, Henry Hunt, the captain, and allrounder Aaron Hardie put on a 60-run stand.

Hunt departed for 40 and Hardie nursed the tail to bring up his maiden List A fifty before he was the last man out chasing quick runs, to give Pramod Madushan, who has been called into the Sri Lanka ODI squad, his fourth wicket.

Niroshan Dickwella led Sri Lanka A chase with 83 from 73 balls but the Australian outfit was again left to rue some sloppy fielding. A half-dozen chances had gone begging in the first match, and a similar amount today, with three blown run-out chances as well as two dropped catches, the most costly of which proved Head’s reprieve of Ashen Bandara on 30 when a simple chance in the deep burst through the fingers and over the rope.

Bandara finished unbeaten on 73 from 67 balls while the finishing touches were applied by rising star Dunith Wellalage, Sri Lanka’s skipper at this year’s U19 World Cup, as he smashed Tanveer Sangha for a six then a four to secure the win.

The Aussies played three spinners, with Matt Kuhnemann the pick of the bunch with 3-43, while Tanveer Sangha claimed 2-72, with his wickets coming in successive balls. 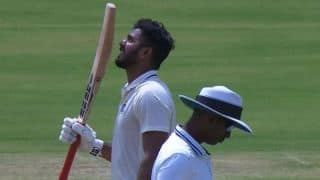