Pat Cummins was rewarded Man of the Match for his career-beat figures of 4 for 24.

Travis Head and Pat Cummins finally put an end to England‘s winning streak claiming the fourth ODI by 3 wickets and what a better occasion than Australia Day. England’s star Chris Woakes provided a good early start with the prized scalp of David Warner. Adil Rashid as well chipped away some wickets in the middle, but Head who filled in for injured Aaron Finch, ensured Australia sailed through the chase within 37 overs. He played his shots freely and was on course for a century but was denied one by mere four runs.

Early in the day, Cummins along with Josh Hazlewood had their way out with new ball as England’s top-four batsmen, Jason Roy, Jonny Bairstow, Joe Root and Jos Buttler, produced ducks.

Chasing 197, David Warner and Steven Smith’s poor run in this series continued. Both the batsmen were gone cheaply. Warner was gone for 13 within 5 overs while No. 3 recalled batsman Cameron White was trapped for 3. England could sense a bit of hope as Australia were tattering at 48 for 2. Smith, too, then fell for 16-ball 4 as he was caught by Joe Root. However, Mitchell Marsh and Head recovered the Australian innings by putting up a 42 runs for fifth wicket. Head, on the other hand, replicated his last year’s form against Pakistan where he slammed maiden ODI century.

Marsh, who made a brisk 32, mistimed Rashid’s full toss and was sent back to the hut. Rashid then snared his third wicket, sending back Marcus Stoinis. It was over to Head and Tim Paine to steady the ship. Paine played the perfect second fiddle to Head who was playing the big shots. Paine and Head notched up 36 runs between them until Head was gone for 96. He smashed Wood’s delivery to mid-on straight to Morgan.

It was followed by horrible mix-up between Cummins and Paine with the former being the target. Cummins punched the delivery past mid-on that could have easily fetched a couple for Australia. However, Paine felt there was no requirement of the second with Cummins almost half-way for the second. Since, Paine needed just 2 boundaries and a couple of runs to help Australia reach the finish line.

Smith and co. capitalised on toss and reduced England to 8 for 5 within 10 overs. However, England fought hard and ensured they put up a decent total on board, courtesy Woakes’ gutsy 82-ball 78.

The sixth wicket of Eoin Morgan would have also gone in Australia s bucket before England reached the double-digit score. However, there were a few missed chances from Australia s end that lead to some resistance from Morgan (33), Moeen Ali (33), Woakes and Tom Curran (35). Morgan and Ali put up the second highest partnership of 53 runs of the England innings. It was followed by Woakes and Curran who added 60 runs to take England past the 150-run mark.

Woakes continued his excellent form with the bat in the series, hitting five sixes in the 82 balls he faced before being caught on the boundary off Andrew Tye. Although Hazlewood and Tye were also the catalyst to folding England cheaply, Cummins rattled the England batting line-up through the innings with his career-best figures of 4 for 24. Hazlewood and Tye shared 6 wickets to end England s innings within 44.5 overs.

The fifth and final ODI will be played at the new Perth Stadium of 60,000 seats.

Man of the Match: Pat Cummins 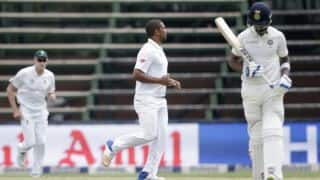