The pace and accuracy of Chris Tremlett will be a big challenge for Indian batsmen as they take on England in a four-Test series starting next month, feels former skipper Geoffrey Boycott. 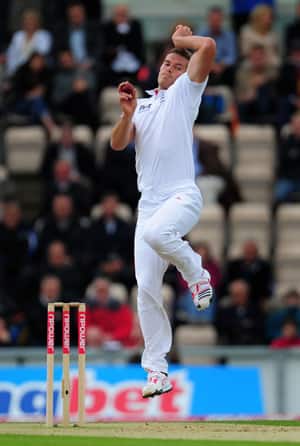 The pace and accuracy of Chris Tremlett will be a big challenge for Indian batsmen as they take on England in a four-Test series starting next month, feels former skipper Geoffrey Boycott. Boycott feels that the gigantic 6’8″ pacer who posed several problems in each of the three Tests against Sri Lanka has caught the imagination of all and sundry.

Not only did the lanky pacer finish with 15 wickets at 23.40 apiece but also forced Sri Lankan captain Tillakaratne Dilshan to miss the final match with a broken right thumb.

“Chris Tremlett’s pace and bounce was tough to handle. There’s Ambrose, Joel Garner and Glenn McGrath. When you get tall men who bowl just short of a length, it becomes very difficult to get over the top of the ball,” he said.

“When you’re batting, you want to be defending with the bat at 45 degrees, so that the ball hits and goes down. When it gets up too high but it’s not a bouncer length, you can’t just duck and weave because you’ve nowhere left to go. It’s then that your fingers get trapped, the ball can go to slip or gully, and it causes innumerable problems,” said Boycott.

The former skipper added that Tremlett and James Anderson, with their contrasting styles, were the logical pairing to lead the line against India. The Test series victory against Sri Lanka has been a big confidence booster for the English team but the only thing which worries an otherwise brimming camp is the inconsistent form of captain Andrew Strauss.

“I think we’re ready for India. England are in a good position. Everyone but Strauss is playing well, so unless we get serious injuries, we’re ready.”

But Boycott was quick to point that Strauss’ s place in the team is secured. “Strauss’s place is not in jeopardy. He’s the captain, and he’s got a terrific record. But he needs to get runs in the middle because he didn’t get any against Sri Lanka,” Boycott told ESPNcricinfo after the third Test against Sri Lanka finished in a draw.

Strauss had a woeful series against Sri Lanka, scoring a meagre total of 27 runs in four innings. Desperate to shake off his indifferent form before the significant series against India, it has been announced that Strauss will turn up for Somerset in the tour match in Taunton starting July 15 that Mahendra Singh Dhoni’s men will play before the four Tests.

“Strauss has a problem against left-arm seamers, so Zaheer Khan will enjoy that. He needs to face a lot of left-arm seamers in the nets and get used to the angle. Right-arm bowlers coming round the wicket is a different thing altogether,” said Boycott.

In 2007, India had registered a first Test series win in England after 21 years.