In October, ICC had approved the concept of four-day Tests. The decision was taken to draw more crowd to Test cricket. ICC approved the trial of four-day Tests to run until 2019 World Cup, following a Test Championship. When ICC had introduced this idea, Dave Richardson, ICC s Chief Executive believed this would assist the two new Test playing nations: Afghanistan and Ireland.

The trial of the four-day Tests will begin with South Africa hosting Zimbabwe for four-day Boxing Test. However, the concept did not go well with several cricketers. Faf du Plessis and Dean Elgar opposed the concept. According to cricbuzz, du Plessis had mentioned, I am a fan of five-day Test cricket. I believe the great Test matches have gone to the last hour of the last day on Day Five. That s what is so special about Test cricket. In four-day cricket or First-Class cricket it does feel easier because there are only four days.

Lance Klusener, Waqar Younis also disapproved the idea. Another cricketer to join the bandwagon is Trent Boult. The pacer is of the opinion that the introduction of four-day Tests would not draw the attention. Instead, he wants the conditions of the pitches to improve as it would help to create more even contests.

Apart from expressing his views on four-day Tests to stuff.co.nz, Boult was pleased with his batting efforts. He built a crucial 61-run stand with Tim Southee to take New Zealand s first-essay score to 373 against West Indies on Day 2.

I love Test cricket, so I’d love to see it stay as it always has. In terms of shortening it to let it become more aggressive, I don’t think there’s any need. There’s other formats for that sort of thing. You want to have an even competition or contest between bat and ball. There’s some good wickets going around at the moment and the balls aren’t moving, so that’s what I’d love to see [a contest] – I wouldn’t want it any shorter to encourage aggression.

I take a lot of pride in my batting

“Believe it or not, I take a lot of pride in my batting. Any contribution, not just from myself but the lower order, is very pivotal. In terms of the game the first innings is the one where we want to go big and get as many on the board as we can. A combination of runs as well as keeping their bowlers and fielders out there. As a bowler you know when the tail comes out and gets a few away, hits a few boundaries, it can become very frustrating.” 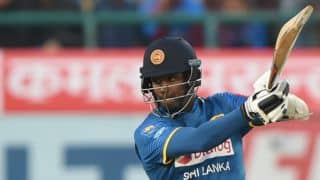