Trent Boult was snapped up by SunRisers Hyderabd for a whopping Rs 3.8 crore.

Boult, who bagged 22 wickets for runners-up New Zealand in the World Cup, was snapped up by SRH for a whopping Rupees 3.8 crore — a massive surge from his base price of 50 lakh — in the February auctions. The left-arm seamer is keen to swing things for SRH.

“Yes, the length changes I guess. I have played a few games in India and the wickets here are a bit slower. With the night games and humidity, the moisture in the air, I hope the ball swings and hopefully I get success with that. I will try and pitch the ball up as much as possible to get the ball swinging,” Boult told PTI in an interview.

Excited to rub shoulders with the best in the business, Boult is looking forward to share the dressing room with the seasoned Dale Steyn and the Indian seamers in Bhuvneshwar Kumar, Praveen Kumar and Ishant Sharma.

“Amazing, I am very much looking forward to it. Not only Steyn but also looking forward to working with the Kumars (Bhuvneshwar and Praveen) and Ishant as well. It’s so great to be playing with the heroes and sharing with them the same dressing room. Dale is a wonderful bowler with so much of knowledge. Hope he can share some of that knowledge with me,” Boult said.

Missing the ICC Cricket World Cup 2015 title at the last hurdle after losing the trans-tasman final at the Melbourne Cricket Ground (MCG), Boult is happy with the opportunity to play under Australian opener David Warner, who was appointed SRH captain for the season.

“Obviously it’s going to be a different experience. Last month playing against them in a grand final and a couple of weeks later he is my captain, so it’s very unique. But very much looking forward to working with him,” said the 25-year-old player.

Making the switch between formats may be different for a player but not for Boult, who enjoys the change.

“I don’t think so. I guess similar things apply but only for a shorter period. For me the game plan is still very similar. I want to keep taking wickets and pitch the ball up and make it swing. I don’t think too much has changed, I have played a lot of T20 cricket,” he said.

Many players have made it to their respective national teams after an IPL stint but Boult comes to the cash-rich competition already as a Kiwi star. Prod him and the youngster plays humble.

“I wouldn’t say that I am a star. I am just loving my cricket and am very passionate about it. I love every opportunity to showcase my skills and to finally be out here in the IPL and on the biggest stages of the world, in front of a big crowd I can’t wait to get involved,” he said.

On being asked about the importance of this IPL season in context to next year’s World T20 in India, Boult believes this event will certainly help to get accustomed to the conditions.

With the limited-overs game tilting in favour of the batsmen, Boult opines that a bowler will continue to call the shots.

“You can look at it that way. The crowd comes to see the ball getting hit and see the good shots. In my opinion this fact offers more opportunities to take wickets. Hopefully we see wickets tumble,” he signed off. 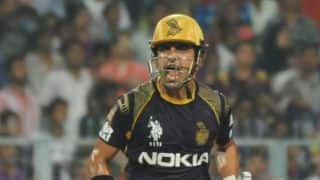