New Zealand's injury woes continue to mount ahead of the third Test against South Africa, with bowling spearhead Trent Boult ruled out Friday after failing to recover from a groin injury.

Wellington: New Zealand‘s injury woes continue to mount ahead of the third Test against South Africa, with bowling spearhead Trent Boult ruled out Friday after failing to recover from a groin injury. Boult’s new ball partner Tim Southee is already out of the Test in Hamilton with a torn hamstring and the Black Caps are also missing batting stalwart Ross Taylor. Boult missed the second Test, won by South Africa by eight wickets, because of groin soreness and chief selector Gavin Larsen said he had failed a fitness test. “Trent did everything possible to get himself ready for this Test and is extremely disappointed to be missing out,” Larsen said. “While he has made good progress, after training yesterday we spoke with medical staff and it was agreed that Trent required a little further time to be ready for the demands of Test cricket.” FULL CRICKET SCORECARD: New Zealand vs South Africa, 3rd Test at Hamilton

With first-choice backup Lockie Ferguson also injured, the Black Caps called up uncapped Central Districts all-rounder Scott Kuggeleijn as cover. Larsen said Kuggeleijn, 25, had consistently finished among the top wicket takers in domestic cricket in recent seasons. Kuggeleijn was unavailable for national selection until recently while he stood trial for rape over an incident dating back to May 2015. However, a jury found him not guilty last month, deliberating for less than an hour before clearing him. READ: Tim Southee ruled out of 3rd Test against South Africa

Kuggeleijn is unlikely to start the Test, with New Zealand set to opt for Neil Wagner and Matt Henry in the absence of Boult and Southee. “Not having Trent or Tim available tests the depth of our squad, but we’re confident of the job that Neil and Matt can do for us,” he said. New Zealand trail 1-0 in the three Test series and need a win in the final match starting in Hamilton on Saturday to draw level with the Proteas. 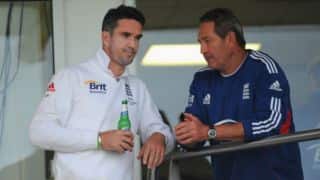