Cook, often criticised for formulaic leadership, saw just about every one of his bowling and fielding changes pay off at Cardiff.

Cardiff: Trevor Bayliss may have told England they needed to “fight fire with fire” if they are to regain the Ashes, but the team’s new Australian coach does not want captain Alastair Cook to change his batting style. Bayliss’s first game in charge saw England thrash Australia by 169 runs in the first Test in Cardiff on Saturday with more than a day to spare as they went 1-0 up in the five-match Ashes series. READ: England wasting Joe Root at No. 5

Cook, often criticised for formulaic leadership, saw just about every one of his bowling and fielding changes pay off at Sophia Gardens. He also held three catches, including a stunning effort in an unusual short mid-wicket position to dismiss Brad Haddin on Saturday. The one downside for Cook was that the opening batsman added just 32 runs in all to his tally of 9,000 which had already seen the 30-year-old left-hander become England’s all-time leading Test run-scorer. READ: The Moeen Ali conundrum

Cook, as if conscious of the need to buy into the ‘attacking’ mindset which served England well during a preceding one-day series win over New Zealand for which he was not selected, appeared keener to go down the pitch to off-spinner Nathan Lyon more often than in previous Ashes contests. READ: Australia paying price for being slack against England

But former Sri Lanka and New South Wales coach Bayliss said there was no need for either Cook or the experienced Ian Bell, who enjoyed a welcome return to form with a second-innings 60 at Sophia Gardens, to abandon the methods that had brought them a combined 49 hundreds in Test cricket. READ: Ashes 2015, Cardiff: Tale of Two Tails

“My message to Alastair Cook is to go out and play his own way,” said Bayliss on Sunday. “Certainly, people like Alastair and ‘Belly’ have scored plenty of Test hundreds. “My advice to them would be to go out and bat like you always have done. “Those two guys are class players and can change their game to suit any situation. The rest of the guys can bat around them.” READ: Ashes 2015 without sledging will lack flavour

England, looking to regain the Ashes after a humiliating 5-0 defeat in Australia in 2013-14, will head to Lord’s for the second Test on Thursday with an unchanged 13-man squad — fast bowler Steven Finn and uncapped leg-spinner Adil Rashid again joining the Cardiff XI. READ: Where was the intensity at Cardiff?

Bayliss believes his side will arrive at the ‘home of cricket’ having understood what he means by aggressive cricket. “Yes, we were talking as a group about being mentally aggressive — not necessarily trying to whack sixes and fours, but if you are mentally aggressive when those boundary balls do come along your feet are moving and you put them away,” Bayliss explained. READ: Australia must learn to thrive on flat decks

When England were losing at home to Sri Lanka last year and struggling early on in a series with India they eventually won, there were calls for Cook to be stripped of the England captaincy, if only to prolong his future as a Test opener. However, the then England management kept their faith in Cook as a Test skipper, although they did axe him from the World Cup squad. “I think that the decision to stick with Alastair has been justified, because his captaincy in this game was fantastic,” said Bayliss. READ: Australia’s ‘Dad’s Army’ leader Chris Rogers makes intention clear

Joe Root, England’s man of the match in Cardiff for his first innings 134, is the heir apparent as vice-captain but Bayliss said there was no need to rush the 24-year-old into a position of greater responsibility. “Joe Root is the vice-captain, and I’m sure he will do a good job in the future some time,” Bayliss said. “It may be a little early for him as yet, but he’s been given the job as vice-captain to learn.” READ: Sky Sports and ‘We didn’t Start the Fire’: What do the words mean? 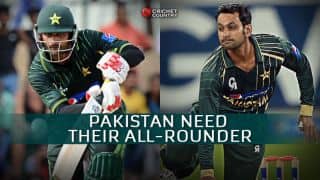