Trevor Bayliss was addressing the media after England's 9-wicket defeat to Pakistan in the first Test at Lord's.

England coach Trevor Bayliss has described allegations his side fixed aspects of a Test against India at Chennai in 2016 as “outrageous”. After England’s nine-wicket defeat by Pakistan in the first Test at Lord’s on Sunday, Bayliss was asked to comment on the allegations made in a programme about spot-fixing broadcast by the Al Jazeera television channel.

“Outrageous,” Bayliss told Sky Sports. “I knew a documentary was going to be coming out. I wouldn’t have a clue what’s in it yet, or seen it. But, having been there (at the Chennai Test), outrageous is all I can say,” the Australian added.

England lost that Test in Chennai by an innings and 75 runs. Bayliss’s words were endorsed by England and Wales Cricket Board chief executive Tom Harrison, who said neither his organisation nor the International Cricket Council had “any credible evidence” of corruption involving England players.

“There is nothing we have seen that would make us doubt any of our players in any way whatsoever,” Harrison said in a board statement issued Sunday. “The limited information we have been given has been discussed with all the England players. They emphatically deny the allegations, have stated categorically that the claims are false and they have our full support.”

Harrison added: “Neither ECB nor the ICC is aware of any credible evidence connecting any England players to any form of corruption. ECB had been aware of the planned Al Jazeera documentary for some time but have not been given the full content. There have been repeated requests for any evidence and unedited materials to be shared with the ICC so they can fully investigate. We, like other member boards, are disappointed that Al Jazeera have not been more cooperative and responsible when making such serious allegations. ECB has a regular dialogue with the ICC and its anti-corruption unit, fully supports its work and will continue to cooperate with their review.”

The documentary alleged that the Chennai fixture had fallen prey to spot-fixing, where specific incidents in games can be manipulated to achieve betting coups without the more complicated task of corrupting one side or another to lose a match on purpose.

The programme also contained allegations of match-fixing in games featuring both England and Australia in Sri Lanka. The ICC said Saturday it took the allegations reported by Al Jazeera “very seriously” and urged “all evidence and supporting material” to be shared with its own anti-corruption unit. 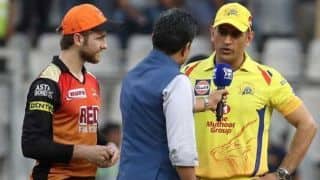