Trevor Penney had opted against continuing with the BCCI by joining NCA in Bangalore.

Sri Lanka Cricket (SLC) has opted for Trevor Penney, who till recently was involved with the Indian team, as an assistant to the national coach Marvan Atapattu.

SLC Secretary Nishantha Ranatunga said Penney has been considered for both roles, Atapattu’s understudy and the job of fielding coach. The appointment is subject to SLC Executive Committee ratification.

Penney, who was with Indian team as fielding coach, along with bowling coach Joe Dawes were asked to take a break by the Board of Control for Cricket in India (BCCI) following team’s poor results in the away England test series in August. They were asked to work at NCA but they had turned down the offer.

Penney, 46 was a successful player for the English county Warwickshire throughout 1990s had a stint with the Sri Lankan national team in 2005 when he joined the side as fielding coach with Tom Moody, who was Sri Lanka’s head coach. 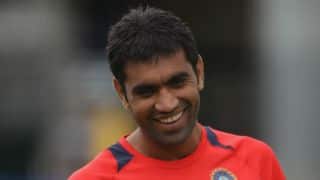 State Bank of Hyderabad in All India PSU T20 final