West Indies take on visitors Australia as they are in a do or die situation going into Match 8 of the Tri-series on Tuesday at Barbados. Australia will be playing their last league game and they need to beat the hosts in order to reach the final of the tournament. Their last fixture against South Africa proved to be unfortunate as rain played spoilsport in the game by abandoning it after one over bowled. Both the teams got two points each. The visitors are currently on No. 2 spot on the table with two wins out of five matches whereas West Indies will still have one game to go after this match. Nevertheless it is a must-win situation for both the teams. FULL CRICKET SCORECARD: West Indies vs Australia, 8th ODI at Barbados

West Indies were outclassed in every department of the game in their previous fixture which was against South Africa. They lost by a margin of 139 runs, thanks to Imran Tahir who finished with career best figures of 7 for 45. Their run rate took a blow after that match as it went as low as -1.189. The last time they faced Australia, they emerged victorious easily towards the end winning the match by 4 wickets. They have not got any bonus points from their two wins.

Australia are in the same position as West Indies are. They need to win this game to enter the final of this Tri-series. They currently have 11 points to their name. This will be the last match Australia will be playing. The absence of David Warner is surely felt as he was in great form right through the IPL and then the Tri-series. According to Justin Langer the team is under pressure, so is skipper Steven Smith. They have got a bonus point due to their emphatic win over hosts.

West Indies’ weakness was recently exposed as they struggled terribly against the spin. They lost nine of their 10 wickets to spin bowling against South Africa. Australia must have noticed this and will be deploying their quality spinners against them. Mitchell Starc will also ask questions from them like he did in the first ODI.

Barbados track is a mystery to the visitors right now and therefore team selection is the key to win here. The hosts will be banking on the services of star spinner Sunil Narine who has a knack of picking wickets in the middle overs and slowing the flow of runs. This Tri-series has been a roller-coaster ride so far with twist and turns after almost every game played. Today’s fixture will decide who gets to play in the final with South Africa.

Arun Rawal, a reporter with CricketCountry, is a daydreamer, movie buff, and cricket fanatic. He could not play cricket, so did the next best thing, writing for it. He loves to play the flick shot over square leg, and believes Sachin Tendulkar is God. His twitter handle is @ArunRawal93) 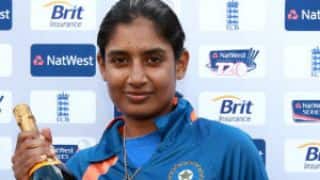 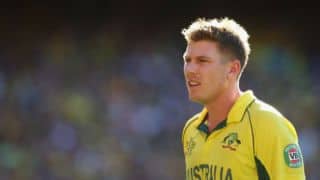