Both teams received a point each which sees Bangladesh now lead the tri-series, while Ireland remain winless after two games in the competition.

The third ODI of the Tri-Nation series between Ireland and Bangladesh was abandoned on Thursday without a ball being bowled at The Village ground after Western Europe Islands of England and Ireland continued to be hit by rain.

Inclement weather has now led to the third game in the last two days to have being washed out after the abandonment of England-Pakistan game at London and the Scotland-Afghanistan game at Edinburgh.

Rainfall was predicted in the forecast on the day and both teams were with a steady drizzle at the Dublin ground on Thursday, but by afternoon it turned out to be a huge downpour forcing the match to be called off. Both teams received a point each which sees Bangladesh now lead the tri-series, while Ireland remain winless after two games in the competition. (ALSO READ: John Campbell, Shai Hope record highest opening partnership in ODIs)

The tournament which is following a double-round format will see teams play each other one more time before the top-two meet in the final on May 17. Ireland face West Indies in the next game of the series on Saturday. 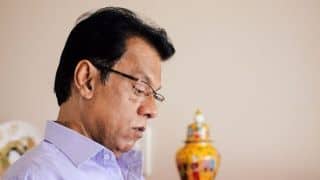