He has been the most prolific among the English batsmen of recent times yet Jonathan Trott feels that series against India will be huge where he needs to check on his emotional quotient in order to continue his good form. 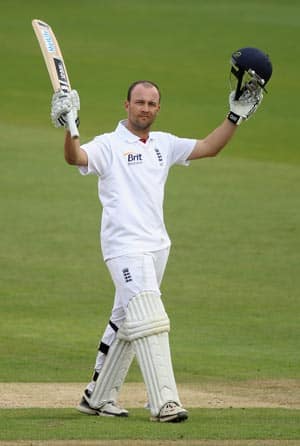 He has been the most prolific among the English batsmen of recent times yet Jonathan Trott feels that series against India will be huge where he needs to check on his emotional quotient in order to continue his good form.

“It will be very exciting playing India, who I haven’t played against yet. And controlling the emotions of the occasion,” Trott said.

England captain Andrew Strauss has termed the series at par with the Ashes and the home team would need to beat India by two clear matches in order to stake claim for No 1 rank in Tests. On his part Trott said that this series will be a great advertisement for cricket.

“It’s a great opportunity, starting at the home of cricket, and going all around the country. It will be a great advert for the game on the back of a good series against Sri Lanka and hopefully it has caught the imagination of the country.”

Trott, who enjoys a fantastic Test average of 62 in 21 Test matches with six centuries feels that there is no reason he can’t continue with his sizzling run of form.

The South African-born did admit that life like cricket is full of ups and downs. “Like life, cricket is similar. There are lots of ups and downs and it’s how you deal with those and bounce back. Form is something that is very precious and you’ve got to look after it and the importance of maintaining your work ethic, your commitment to the side and to your position and what your role is.”

Trott is pretty cut out about his role in the side. “My job at No 3 in the England team is to bat as long as possible and get most of the runs.” The 30-year-old feels privileged that whenever he has scored centuries, it’s been for a winning cause.

“I was thinking the other day, we’ve won all the Tests I’ve scored hundreds in except the one against Australia in Brisbane where we managed to save the game,” he said. “That is pleasing and contributing to winning Tests is what it is all about as an individual.”

But the one accusation that has dogged him throughout his incredible run is his slow scoring when the team need him to kick on and up the tempo. And for the first time he conceded that he does go too slow on occasions.

But he also defended himself by questioning whether it was fair to leave run-scoring responsibility to someone else when you’re already in and settled.

“Sometimes I might go a bit slowly,” he admitted.

“But I think a lot of the time people get confused with an in batter, ticking the ball around, going along quite well, picking up the odd boundary, and a new batter coming in and saying ‘you can get on with it’.”

“You’ve got to weigh up the option of putting your foot down a bit more and leaving it up to someone else. I’m very wary of that.”

Trott claims that he doesn’t pay attention to his personal statistics and is more focussed on team goal. “I don’t know what my stats are. I don’t pay attention to them, I try and worry about how many Test series wins I can contribute to and be a part of.”