Jonathan Trott struck a double century and Ian Bell went to the brink of a hundred as England piled on the runs against a depleted Sri Lanka attack in the first Test here on Sunday. 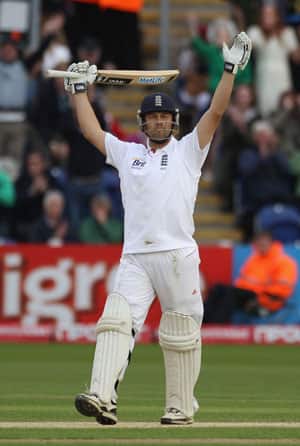 Jonathan Trott struck a double century and Ian Bell went to the brink of a hundred as England piled on the runs against a depleted Sri Lanka attack in the first Test here on Sunday.

England were 491 for five in reply to Sri Lanka’s first innings 400, a lead of 91, at stumps with just one day of this rain-marred first of a three-Test series remaining.

Trott made 203 and put on 160 for the fifth wicket with Warwickshire colleague Bell, unbeaten on 98 at the close. Eoin Morgan was 14 not out.

But, with more bad weather in an already rain-marred match forecast for Monday, a draw in this opening match of a three-Test series remained the most likely result.

It was a different story though for Trott’s fellow South Africa-born batsman Kevin Pietersen, whose well-documented problems against left-arm spin continued when he fell to Rangana Herath for just three.

This was the composed Trott’s second Test double hundred following his 226 against Bangladesh at Lord’s last year.

And of his six Test hundreds, four have been in excess of 150 — a remarkable conversion rate that has helped Trott to an average of 66.77, second only to that of Australia great Sir Donald Bradman’s 99.94.

Trott’s more than eight-hour innings eventually ended when he was bowled making room to cut against the spin of Sri Lanka captain Tillakaratne Dilshan, having faced 409 balls with 17 boundaries.

He has been criticised, though, for slow scoring and in taking 190 balls to make 78 runs on Sunday he gave his detractors some ammunition.

“It was tricky today, they bowled into the rough and it was difficult to score freely,” Trott said in his defence when speaking to Sky Sports.

“After drinks we said ‘let’s try to push on a bit’, and a few overs we actually did better than we hoped. They tried to slow us up today so hopefully we can kick on Monday and get further ahead of them. The good thing is they were turning it off the straight so it brings (off-spinner) Graeme Swann into play tomorrow. Hopefully the Welsh weather will smile on us.”

Sri Lanka all-rounder Farveez Maharoof added: “It was a tough day at the office. Credit to the England batsmen, it’s what Test cricket is all about.”

England, after rain washed out the whole of Sunday’s morning session, resumed on 287 for two with Alastair Cook 129 not out and Trott 125 not out.

Cook had added just four runs when he edged a cut off Farveez Maharoof to wicket-keeper Prasanna Jayawardene to end a partnership of 251 with Trott.

Pietersen had looked uncomfortable in the four balls he’d previously faced from Herath before he went back, with a cross-bat, to a delivery that kept low.

It was the 19th time in Tests and 43rd occasion in all international cricket Pietersen had been dismissed by a left-arm spinner.

But he had a lucky break on 19 when a cut off Maharoof was dropped in the gully by former capain and wicket-keeper Kumar Sangakkara, while ragged outfielding saw Sri Lanka give up several boundaries.