Mortaza is now the highest wicket-taker in the history of Dhaka Premier League.

Bangladesh ODI skipper Mashrafe Mortaza has become the highest wicker-taker in nation’s list-A tournament, Dhaka Premier League. He has 39 wickets, going ahead of Abu Hider (35), helping his side Abahani Limited to title. Mortaza has credited his new-found success to England’s Stuart Broad. He said: “I have tried to bowl in a semi-cross seam position much like England’s Stuart Broad. I worked with my wrist position like the way I always do. But for me the focal point was to learn some new tricks that would help me get a better result in flat wickets.”

Mortaza s reason behind adding the semi-cross seam delivery was the type of pitches on offer across the world. He said: “It was a flat wicket during the Champions Trophy and it would be the same in the next World Cup so felt that something new should be tried. I could grip the ball with seam-up and cross seam but this time I opted to see how it goes with semi-cross seam.”

Bangladesh’s next international assignment will be against Afghanistan in a 3-ODI series. 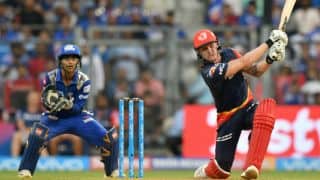