Pandya still has one opportunity left to have a crack at Australia, when India play them in three ODIs in January.

It s been two months since Hardik Pandya last featured in an international match for India having sustained a back injury during the Asia Cup in September. The injury caused the allrounder to not only miss the series against West Indies, but it also ruled him out from India s high-profile tour of Australia.

That said, Pandya still has one opportunity left to have a crack at Australia, when India play them in three ODIs in January. Back in 2016, it was against Australia in January 2016 that Pandya had made his debut against them at Adelaide and although it was the 20-over format, it paved the way for Pandya s ODI debut later that year.

On Tuesday, Pandya hit the straps in Mumbai where he was seen bowling and batting in the nets. “I’m trying hard to be fit for the ODI series against Australia to start in January 2019. To get back to full fitness, I’m going through rigorous bowling sessions in Mumbai. I have just started bowling after 60 days. Once I bowl a few overs in the ODIs, I think I should be on the right track,” said Hardik, as per a TNN report.

Despite being away from action, Pandya is confident about the India-Australia series being a competitive one. “We are a formidable side and we should give a good fight to Australia who I believe are very strong in their own backyard. I am hoping for an exciting series,” he said.

Finding my form with the bat, slowly but surely pic.twitter.com/SjtAI7k8g5

It was against Pakistan in a league match of the Asia Cup that Pandya collapsed while bowling and had to be stretchered off the field. And while he has been away from the national side, his brother Krunal Pandya received his India cap, and picked up a wicket and scored an unbeaten 21 runs in the three T20I series against West Indies. Having shown promise against WI, Hardik expects his brother to do well against Australia as well.

Focused and determined! Feels good to be bowling after 60 days, on my road to recovery pic.twitter.com/D5moHZKVfd

“We are a formidable side and we should give a good fight to Australia who I believe are very strong in their own backyard. I am hoping for an exciting series,” Hardik said.

Even coach Ravi Shastri, during India s first practice session had mentioned that India will miss the services of Hardik Pandya as his all-round skills offer more balance to the team.

“One player we ll really miss is Hardik Pandya, who s had an injury because he gives that balance to the side as a bowler and a batsman which allows you to play that extra bowler. Now we ve got to think twice, but hopefully our fast bowlers do well and we don t miss him that much,” Shastri had said. 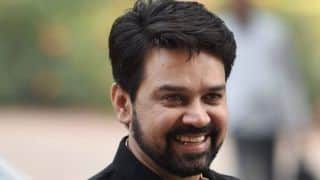