The decision to include Hanuma Vihari in India's Playing XI for the fifth Test against England ahead of Karun Nair has received plenty of flak.

The decision to include Hanuma Vihari in India’s Playing XI for the fifth Test against England ahead of Karun Nair has received plenty of flak. On Friday, shortly before the toss, the BCCI tweeted images of Vihari receiving his first international cap, which meant that Nair, part of the India’s primary squad for the tour of England, would have to continue warming the bench.

The decision was heavily criticised by Sunil Gavaskar during the pre-match show, and echoed by many across Twitter.

India’s selectors have just made a damning statement of what they think of Karun Nair as a player. Very very hard on him. Would love to know what he was told when the team was announced.

Can Hanuma Vihari make the number 6 spot his own? Give him a run of a few games at least. At the same time spare a thought for Karun Nair!

It s quite intriguing that no one is talking about the possibility of playing Karun Nair…If India wants to play 6 batsmen, he should be the first choice. If bowling a little is the deal-breaker, it s another matter… #EngvInd

If Vihari is selected ahead of Karun Nair it will endorse the view that the team managment overrides selectors choices.

India A capt Karun Nair who scored an unbeaten treble hundred against England hasn’t batted in the nets at The Oval & no journalist writes about it. They all seem to be interested in off the field match between Ganguly & Shastri. This is what modern cricket journalism is. Sad

Fans were equally unhappy with Vihari getting the not ahead of Nair.

It s not abt selecting btw Hanuma Vihari or Karun Nair. Hanuma Vihari deserved this place bt same goes with Karun. Just becz u can t make him play in the top order is no excuse to drop him.

Hanuma Vihari ahead some one who was there before ! Karun Nair has every right to ask the team managment what has he done wrong to not be picked in the side #ENDvIND #ENGvsIND

A youngster, who was not even selected for the tour primarily, comes and gets a chance straight into the playing eleven. And Karun Nair has been warming the benches after smashing a terrific triple ton. How cruel it can get! Indian selectors and team management suck! #INDVsENG

Indian team is losing in England because of #ViratKohli overweening attitude. He plays favourites. Not picking Pujara in the first test, playing an unfit Ashwin in the 4th, and picking up Vihari ahead of Karun Nair are but a few of these examples. Great batsman, poor leader. 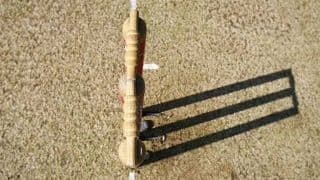