Warner is one of the best when it comes to running between the wickets, which shows the kind of effort Bavuma has put to pull off a thriller.

The first Test between Australia and South Africa at Perth has witnessed some breathtaking moments and the game so far has been brimming with action. From South Africa’s return from the dead to couple of tons from JP Duminy and Dean Elgar, it has been a roller-coaster ride for the fans here at Perth. The best moment on the field was undoubtedly witnessed during the second session when Temba Bavuma showed some incredible athleticism to end David Warner’s innings. While batting on 35, Warner played one down towards point and called for the single, Bavua steamed in and got to the ball in no time. He was quick to get rid of the ball and more importantly hit the target from a difficult angle. Warner would have never thought that he could have been run out in this manner as Bavuma was in no position to hit the target from that angle. Bavuma hardly had any part of his body on the ground when he released the ball and has certainly scripted one of the best run-outs in the history of Test cricket. FULL CRICKET SCORECARD: Australia vs South Africa, 1st Test at WACA, Perth

Warner is one of the best when it comes to running between the wickets, which shows the kind of effort Bavuma has put to pull off a thriller. Warner was looking good on 35 and was scoring runs at a brisk rate while chasing a target of 539 runs in the fourth innings. Warner scored 97 in the first innings before dale Steyn got the better of him and was looking good in the second innings as well. It needed some kind of brilliance to remove Warner and BAvuma made sure he did that.

Take a look at the video here:

Sheer brilliance from Bavuma to run out Warner. A salmon with a guided missile. #ausvsa pic.twitter.com/OiOAdlIcUj

Take a look how Twitter reacted to this spectacular run out from Bavuma.

He is been so #acrobatic n so #quick in the field.. So glad watching him on the field #Bavuma #AUSvSA pic.twitter.com/rQAAq5Bld1

What an effort from Bavuma! The kind of attitude which is required to challenge the opposition & win matches has been displayed. #AusvSA pic.twitter.com/rOPJ7K4XfS Faisal Caesar (@faisalyorker) November 6, 2016

That Bavuma run out pic.twitter.com/ldKsCdNmDD

Hi @OfficialCSA I need an oil painting commissioned of the Bavuma run out. pic.twitter.com/fYkK5IPRPC

That run out from#bavuma actually reminded me of the katich run out by #abdevilliers.. Perhaps that one was a bit easier 😉 #ausvsa

That Bavuma dismissal was from the Jonty Rhodes playbook and beyond. Recognize!

Wow, that’s a crazy piece of fielding by Temba Bavuma

Australia have a massive task in front of them as chasing 539 is akin to climb a mountain. They will give their best to save the Test but South African bowlers are pumped and will eye for wickets. With more than a day’s play left, South Africa are favourites for this game. 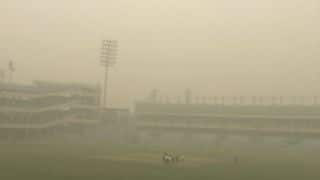