Steven Smith accepted all the criticism thrown his way, and stated that 'it was a serious error of judgement' on his part to let this (ball-tampering) happen.

What happened during Day Three of the recently-concluded third Test between Australia and South Africa, at Cape Town, is known to all by now. Australia skipper, Steven Smith, opener Cameron Bancroft and vice-captain David Warner‘s plan of ball-tampering cost them, and Cricket Australia, heavily. After huge media attention and criticism, CA announced a one-year ban to Smith and Warner. Meanwhile, Bancroft is to serve a nine-month punishment. In addition, both Smith and Warner won’t be considered for Australia captaincy for the next two years.

Having been asked to leave South Africa mid way through the tour, Smith addressed the Australian media for the first time since the controversy. A dejected Smith openly accepted all the criticism thrown his way, and stated that ‘it was a serious error of judgement’ on his part to let this happen. When asked about his equation with Warner, Smith said that he shouldn’t have gone ahead with the plan, but doesn’t blame his teammate for the fiasco. Smith was comforted by his father several times in the media interaction as the 28-year-old broke down several times.

Twitteratti usually the first ones for trolling consoled Smith, and wished for a strong comeback from the Australian after his ban.

Tough to watch Cameron & Steve go through the 2 statements they just made. They will learn from this & be better in the future I m sure!

The sport needs the media and the media needs the sport. Having been on both sides, I see how honesty and respect are so important for this relationship, both ways.

Which is another reason why Smith has won many fans today.

Steve Smith is a very good man who has made a bad mistake. Tough to watch

Accepting his mistake twice in a press conference with 100s of cameras on him is no way an easy task, not especially when you know you are guilty. #Smith is brave. Really really brave. I can’t wait for April, 2019. #SAvAUS #BallTampering

.@stevesmith49 is one of the bravest cricketers I have seen in my life, if not the bravest.

Just spent 20 minutes consoling my crying 9 year old who is a major Steve Smith fan after he watched the press conference. Encouraging him and all kids to write Steve a letter telling him how much you love and admire him.

Haven’t Australia made enough of a spectacle of Steve Smith? I’m blown by what he is being put through.

Just seen @stevesmith49 s press conference. As a parent, I m gutted for him & his family!

Shout me down if you want, but I m speaking as a parent!

It will get better mate!

Oi Oi Oi! It s not my business but it s done and dusted!

I think 1 year is harsh! But to the 3 youngsters, y all gonna have to live with this – reflect quickly and know there s a lot of life ahead so don t stop here! Feel free to come see me in Jamaica anytime! #JustSaying

Smith felt “devastated” to see his parents, and country in such a spot following the ball-tampering incident. He ended by pointing out that he admires and loves the game of cricket, and would never repeat such a thing which tarnishes the image of the sport. 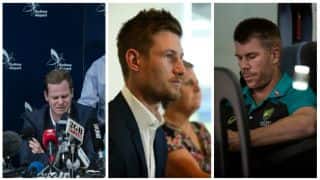