Chasing 305 in the final was never going to be an easy task and the Sri Lankan batsmen buckled under pressure.

In-form opener Yashasvi Jaiswal top-scored with 85, while slow left-arm spinner Harsh Tyagi claimed six wickets as India U-19 side asserted their dominance in Asia with a thumping 144-run win over Sri Lanka U-19 to clinch the U-19 Asia Cup title at the Shere Bangla National Stadium, Dhaka on Sunday. The win gave India their sixth title in the continental tournament.

Opting to bat, Indian openers Jaiswal and Anuj Rawat (57) laid the foundation with a belligerent 121-run partnership. Jaiswal was the more aggressive in his 113-ball knock that was laced with eight boundaries and a six, while Rawat struck four boundaries and three sixes during his 79-ball stay at the crease. Rawat was the first to depart after he was trapped leg before in the 26th over off slow left-arm spinner Dulith Wellalage. Kalana Perera then dismissed Jaiswal in the 38th over after he was out lbw.

Devdutt Padikkal chipped in with 31 before he was cleaned up by Kalhara Senarathne in the 41st over. By this time, India were 194/3. Skipper Simran Singh (65*) and Ayush Badoni (52*) then shouldered the responsibility as the duo powered their side to 304/3 in 50 overs. Both players boasted of a strike rate well above 150 as they took the Sri Lankan bowling attack to the cleaners. Singh scored four sixes and three boundaries during his 37-ball knock, while Badoni struck five hits over the fence and two boundaries in his 28-ball innings.

Chasing 305 in the final was never going to be an easy task and the Sri Lankan batsmen buckled under pressure. The Sri Lanka cookie crumbled from the seventh over after opener Nipun Dananjaya was caught by Rawat off Jangra. Tyagi then took stock and claimed six wickets to leave Sri Lanka reeling at 141-9 in the 36thth over.

Tyagi, who was awarded the man-of-the-match, said: “The instruction was to bowl at one spot after doing a video analysis of the Sri Lanka team. The wicket also assisted the spinners.”

Nishan Madushka looked dangerous, but he missed out on his half century by one run after he was caught behind off Tyagi, who choked the Sri Lankan batting line-up. Dulith Wellalage did try to resurrect the Sri Lankan innings by scoring 48, but he received no support at the other end at was out lbw off Siddharth Desai.

Jaiswal, who scored 318 runs in the tournament, was adjudged man-of-the-tournament, for his consistency. 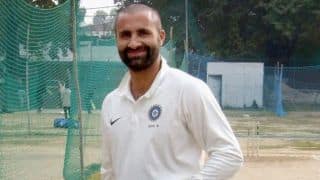