United Arab Emirates reached their target of 103 with ease, having more than 29 balls to spare and 5 wickets in hand in the first T20I against Papua New Guinea.

United Arab Emirates (UAE) cruised past Papua New Guinea (PNG) in the first of the three-match Twenty20 International (T20I) series by 5 wickets. The hosts reached their target of 103 with ease, having more than 29 balls to spare and 5 wickets in hand. Batting first, PNG could manage 102 runs after Amjad Javed and Mohammad Naveed wrecked havoc on their batsmen. It was only Sese Bau (22), Mahuru Dai (31) and Norman Vanua (14), who reached the double-figure mark. Bau and Dai added 37-runs for the fifth wicket, with the latter top scoring with 31. Javed recorded figures of 3 for 12, while Naveed ended with figures of 3 for 24. Sultan Ahmed, Imran Haider and Rohan Mustafa ended with one wicket apiece. Full Cricket Scorecard, United Arab Emirates vs Papua New Guinea – 1st T20I

In their chase, UAE lost their skipper Rohan Mustafa early into their innings for just 9 runs. It was No. 3 batsman Shaiman Anwar, who starred with the bat for his side, stitching-up stands with Naveed and M Muhammad Usman respectively. Anwar made a quick 25-ball 39 that included 4 fours and a six. PNG did make a comeback in the form of Wilie Gavera, who snatched wickets of Naveed and Rameez Shahzad. Mohammad Qasim and Ghulam Shabber ensured UAE get past the target with no more casualties as UAE won the tie by 5 wickets. Apart from Gavera, it was John Reva who picked 2 wickets (Muhammad Usman and Shaiman Anwar), while Norman Vanua picked just one.

The second match of the three-match T20I series will also take place at Abu Dhabi on April 14. 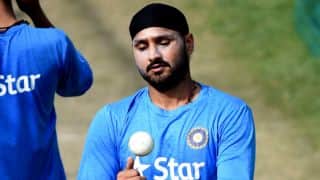