UAE came up with an escalating performance as they beat fellow minnows Hong Kong, in the third and final ODI at Dubai, by six wickets to clinch the series.

Hosts United Arab Emirates (UAE) came up with an escalating performance as they beat fellow minnows Hong Kong, in the third and final One-Day International (ODI) at the Dubai International Cricket Stadium on Thursday, by six wickets to clinch the series with a better performance in the points table of the tri-nation series, which featured minnows Scotland as well. In what was a low scoring affair, Hong Kong posted an average total of 174 in 48.5 overs, while UAE chased the total down in 38.1 overs for the loss of four wickets, as they rode a convincing, and commendable six-wicket win over the hosts.

Earlier, UAE skipper Rohan Mustafa won the coin toss, and elected to field first, as Hong Kong were off to a steady start, before the opening wicket fell at the score of 47, in the form of Cameron McAulsan for mere 27 in the 12th over, while he was followed by Babar Hayat the very next over for an unfortunate duck. He was again followed by opener Christopher Carter for mere 18 the very next over. However, it was only 37 runs later, when the fourth wicket fell in the form of Waqas Khan, who fell for mere 8 in the 26th over, at the score of 80. FULL CRICKET SCORECARD: United Arab Emirates vs Hong Kong, 3rd ODI at Dubai

Just a run later, it was Ehsan Nawaz, who fell for mere 11, followed by the final wicket in the form of Nadeem Ahmed for mere three, as Hong Kong were bundled for 174 within 49 overs. UAE’s Imran Haider, along with Zahoor Khan claimed four and three wickets, respectively.

It was 33 runs later, when UAE’s final wicket fell in the form of Shaiman Anwar, who struck an brilliant half-century, while UAE completed the chase comfortably within 39 overs. Hong Kong’s Ehsan Khan was the top wicket-taker, with 3 scalps for 30. 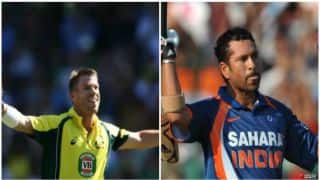