Dubai: It was a half-century 25-year-old batsman Steven Taylor will remember for a lifetime, but sadly, the knock came in a match that was abandoned thanks to desert rain at Dubai on Friday. United States of America (USA), playing their debut Twenty20 International against United Arab Emirates (UAE), were nine balls short and well ahead of the Duckworth-Lewis for the five-over mark of registering a historic win in their maiden T20I match. However, that was not to be.

Put into bat with overcast conditions making it a good day for cricket, Taylor single-handedly powered USA to 152/7 after receiving no support from the other end. His 39-ball 72 was studded with nine boundaries and three sixes as USA reached the total in 15 overs before the heavens opened. Roy Silva made a quick 25 off just 7 his knock laced with three huge hits over the fence at the ICC Academy Ground and the solitary boundary. (ALSO READ: UAE vs USA 2019: All you need to know about historic T20I series)

Due to persistent rains, UAE s target was revised to 143. Jasdeep Singh s double struck had UAE reeling at 20/2, but three balls into the fourth over and the umpires had no option but to call for the covers on the field for the last time on the day.

At the time, UAE’s five-over target with two wickets down on DLS was 51. Jasdeep made his way to the team after fast bowler Ali Khan was left out because of back spasms.

Both teams face each other in the series decider at the ICC Academy Ground on Saturday. 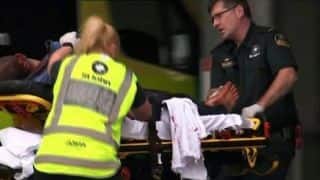