Shoaib Malik and Umar Akmal helped their team to competitive total while Mitchell McClenaghan picked 2 wickets in the 2nd T20I at Hamilton.

Pakistan set a target of 169 for New Zealand to win in the second Twenty20 International on Sunday, after right-handed batsman Umar Akmal scored a fluent half-century. Pakistan scored 168 for 7 ion their allotted 20 overs, with Umar getting 56 off mere 27 balls, studded with four sixes and as many boundaries. The second highest scorer for Pakistan in the innings was Shoaib Malik, who struck 30-ball 39 with the help of five boundaries, and added as many as 63 runs with Umar for the fourth wicket. Pakistan won the toss and elected to bat first. Mohammad Hafeez and Ahmed Shehzad came out to bat first while New Zealand’s Mitchell Santner opened the attack for his side. Santner started off his innings by trying to restrict the runs, but eventually that didn’t happen with the four and six struck by Hafeez in the first over. Corey Anderson came on attack and he showed excellent spells from his side staunchly restricting the visitors. It was in the 3 rd over with Corey Anderson picking Ahmed Sehzad at 9 from 8 with an easy catch to Kane Williamson. LIVE CRICKET SCORECARD AND COMMENTARY: New Zealand vs Pakistan, 2nd T20I at Hamilton

Sohaib Maqsood came in for Pakistan, while Mitchell McClenaghan opened the attack from the hosts side and restricted his spells as well. By the 5th over Pakistan were 34/1 and considering the hosts batting line up has been strong enough, visitors had to set commendable target for the competitors. It was at the 6th over Mitchell Santner picked Hafeez at 19 for 23 caught by Todd Astle. Hafeez played a good innings playing 2 fours and 1 six. Astle came into bowling attack and Shoaib Malik comes in for the Pakistan as they required runs on board. After Hafeez wicket, Pakistan were 36/2 and needed to build up their pace.

With the entry of Grant Elliott, Pakistan found some space to score some runs on board and started playing one run each and managed to reach 60/2 after 10 overs. But just the moment Pakistan was back on track; Elliott picks his wicket as well of Masqood who was playing in momentum at 18 from 23 caught by Santner.  After the news coming in with regards to his ban being suspended, Umar Akmal comes on crease for his side to support Malik. Akmal smashed consecutive sixes with Santner on the bowling side. Santner’s spells proved expensive by giving away 13 runs in the end of 13 th over with Akmal playing on 16 from just 6. LIVE CRICKET SCORE: New Zealand vs Pakistan, 2nd T20I at Hamilton

Pakistan bounced back in the game tremendously with Malik and Akmal’s brought 50 runs stand within 15 overs and was 115/3 in 15 overs. Unfortunately, Malik could not complete his half-century and was bowled by McClegnaghan for 39 from 30 with 5 fours. Pakistan’s skipper Shahid Afridi who came on crease with a hope to bring some runs board got out for 6 by Adam Milne and caught by Williamson once again.

Imad Wasim joined in with Akmal to bring some hope of going par 150 which was easily possible. Akmal successfully completed his half-century with 3 fours and 4 sixes. Though Akmal was playing his best, he could not find the right support on the other with another loss of Wasim by McClegnaghan again and caught by Milne. Sarfaraz Ahmed who came in also went out in the last over with second wicket for Adam Milne by run out. Pakistan completed their innings at 168/7 after 20 overs with Umar Akmal standing out for his team with 56 from 27 runs. 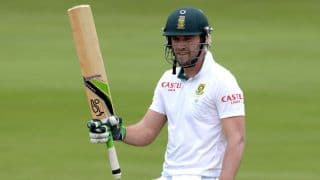